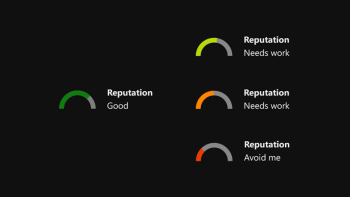 Along with levels based on a user’s behavior, Microsoft has announced it will take away Twitch broadcasting privileges from users with bad behavior.

Xbox One users reported for disruptive or abusive behavior won’t just see their reputation score fall; these users will also lose certain privileges. Microsoft is redesigning the Xbox Live community-powered reputation system already on the Xbox 360 for the Xbox One with the intention of both rewarding well-behaved players and punishing abusive players.

Microsoft broke down the reputation system into the following levels: Good, Needs Work, and Avoid Me. The majority of players will fall into the first category. Microsoft has not decided how to reward good players yet, but it will share more information in the future.

The company will also begin sending out warnings this month for players with declining reputation. The warnings will be based on community feedback since Xbox One’s launch. Warnings are intended to “remind players about their effect on the community” and encourage positive behavior.

Players who continue to abuse others will be designated as “Avoid me” and experience penalties. Microsoft has not elaborated on what these penalties will entail, but one provided example is a reduction in game matchmaking pairings and the loss of Twitch broadcasting privileges.

So far Microsoft has been thinking hard about punishing players with poor behavior, but at GDC the company announced it has also been looking to incentivize good behavior. Players must see that actions have consequences, but encouraging good behavior can have better effects than punishing poor behavior.

This Space Blimp Will Watch You from The Stratosphere