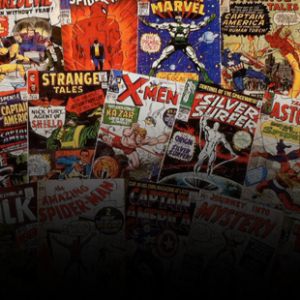 This week, we highlight titles from Marvel, Image, Dark Horse, Top Shelf and Vertigo, plus a new webcomic. Gird your loins.

As we ramp up our coverage of comics here at The Escapist, we want to do more than simply rehash the same Super Hero news you'll get everywhere. Fear not - we intend to cover it all - but we plan to shine a light not only on cool developments in mainstream comics, but on the indies and underground titles that don't get nearly enough attention. As part of that effort, once a week we'll be running down our favorite or most anticipated titles from across the spectrum that we think are worth your attention and money.

I'll admit this week was a little tough for me in the whiniest possible way. I've been deliberately ignoring the fact that Fables will be ending in early 2015. Unfortunately, the most recent issue (discussed below) sets in motion the series' endgame, which forces me to admit that, yes, it's ending. And now I haz a sad. A 12 year-run isn't bad of course, and 150 issues is twice as long as The Sandman and Lucifer both lasted. And, yes, it's also better to end on purpose than simply go on forever. BUT WHAT ABOUT MY NEEDS, I say to Bill Willingham. I guess I'll have to prepare for them to be neglected again. Truly, I am history's greatest martyr.

Anyway, enough of my complaining. For this week, Marshall Lemon, Stew Shearer and myself have chosen titles from a range of genres - fantasy, super hero, science fiction, and a new webcomic we happened to stumble on. Read on, and prepare your wallets.

Wolverine and the X-Men #42 - Marvel Now

Wolverine and the X-Men, from the get-go, has been a book that expertly balances its elements of drama, humor and action to create one of the most enjoyable reading experiences in the Marvel universe. Issue 42, in turn, brings Jason Aaron's long run on the series that very much exemplifies his style and work over the past three years. The issue splits its attention between the students of the Jean Grey School for Higher Learning as they contemplate graduation and an older, future Wolverine as he prepares to close the school down for good. Overall, it's a great, self-contained issue that's fun to read, more than a little heartwarming and, in parts, really funny. Newcomers hoping to find out what all the fuss is about might be put off by the page-to-page shifts in art style (numerous series artists returned to draw this issue). That said, if you're interested in giving the rest of the series a try and want a good sample of its style, issue 42 does the trick.

Best Moment: Bad guys beaten by the power of funk.

Buy it digitally, or find a local store here.

The latest of Dark Horse's Conan books King Conan: The Conqueror picks up where the company's adaptation of Robert E. Howard's The Hour of Dragon. Conan, recently deposed from the throne of Aquilonia by an evil sorcerer, is searching for a magical stone that could be the key to defeating the baddie and retaking his kingdom. The first issue of Conqueror does perhaps spend a bit too much time explaining all of this. That said, once the story actually gets moving it's a pretty splendid comic that sword-and-sorcery fans should love. Writer Timothy Truman presents Conan as the perfect combination of powerful and fallible, while artist Tomas Giorello and colorist Jose Villarrubia provide gorgeous imagery that also manages to convey the grime and grit of Hyboria. King Conan: The Conqueror, put shortly, is off to a great start in this first issue and I'll be looking forward to the next five issues.

The League of Extraordinary Gentlemen is one of my all-time favorite comics, and its Nemo spin-off books are proving worthy successors. Continuing the exploration of League's shared universe for every fictional character, Roses of Berlin sends Captain Janni Nemo (descendant of Jules Verne's Nemo) into World War II Berlin to rescue her captured daughter and son-in-law. Having Nemo face a Nazi-equivalent evil is exciting enough, but Roses goes a step further by imagining Berlin as Fritz Lang's Metropolis, complete with "advanced" robotic intelligences that predict her every move. The resulting conflict doesn't only make for an excellent pulp-filled action romp, it expands League's scope with new characters and subtle references that careful readers can uncover (my personal favorite being that Germany's leader is not Adolf Hitler). There are a few minor callbacks to previous League books, and a significant character from Nemo: Heart of Ice makes a reappearance, but otherwise Roses of Berlin remains an excellent standalone story that can be devoured in a single sitting. I highly recommended it.

As a young boy, I had an incredibly unhealthy fixation on end-of-the-world scenarios that were always just around the corner. I eventually learned to get past it, but it's helped me learn first-hand that not all adolescents (or even adults) understand the matter rationally. That's the principle behind Sheltered's "Pre-Apocalyptic Tale", where the children of an off-the-grid survivalist community murder their parents to preserve supplies for an imminent apocalypse. When the expected disaster never occurs, the community's "leader", Lucas, turns to desperate methods of maintaining cult-like control over the traumatized kids, with decidedly mixed results. By Issue #7, this has led to even more dead bodies, an armed conflict on the settlement's outskirts, and the beginnings of a coup led by children doubting Lucas' leadership abilities. Sheltered rethinks Lord of the Flies through the lens of Doomsday Preppers, keeping you on the edge of your seat while asking what happens if kids are raised to constantly expect Armageddon in their lifetimes.

Read it digitally for free, or find a print version here.

The Manhattan Projects looks back at recent history and asks two questions: (a) What if the greatest scientific minds of the 20th Century were psychopaths and monsters, and (b) What else did they work on in their spare time? The resulting comic is a darkly humorous tale perverting the memory of historical geniuses, but you don't care because you're transfixed on the sheer audacity of it all. Einstein, Oppenheimer, and other famous researchers behave like supervillains from The Venture Bros, pushing the boundaries of science while destroying the armadas and shadow governments that oppose them. The team has explored other dimensions and traveled the stars, but now the luck of mad science is running out as the story builds to a showdown with Oppenheimer's alternate personalities. Sticklers for historical accuracy won't find much of value here, and the content is disturbing enough that you'll feel awful cheering for the protagonists. Thankfully, the imaginative plots twists and cartoon-inspired artwork are a draw by themselves, and if you're a fan of twisted alternate history sci-fi, that's all the better.

Buy it digitally, or find a print version here.

Occasionally it's fun to catch someone at what one at least hopes is the beginning of a good career, and that's the case with this new webcomic from writer-artist Jediael Fraser. The story follows the trials and tribulations of a New York City boy named Hayden Bliss, recently escaped from the apartment in which he grew up (where he was treated like a prisoner) and now living on the streets. Hayden apparently has powers of some kind, and is currently being mentored by an old man named Dante who may have powers of his own. It's a slow burn - only 9 pages have been published since February 17 - and it's really rough, especially the art. This is definitely the work of a young artist, so know that going in. But it's highly reminiscent of the kind of experimentation we'd see back in 2003 when the internet seemed overflowing with ambitious webcomics, and as far as I'm concerned we could use more of that.

You can read for yourself on the official site: http://imprintchronicles.com/

Geppetto, the former emperor and adversary of Fabletown, has hatched a scheme to regain control of the Sacred Grove, which, for those who don't read the series, is a forest of magical trees from which he carved not only Pinocchio, but also an entire army of cold-blooded wooden soldiers. The last time he controlled the grove he founded a massive, multiple-worlds spanning empire responsible for billions of deaths, so obviously his current plot doesn't bode well for the long-suffering protagonists of the series. Creator Bill Willingham announced last November that Fables will end with issue 150, and this issue is clearly intended to set in motion the series' final storyline. Even so, it calls back to events from far earlier in the series and with a tight focus on Geppetto, it manages to feel fairly self-contained. I wouldn't say it's a good introduction for new readers - if you're new to the series, definitely start from issue one - but if you've been ignoring the series for a couple of years, this issue is a good way to get back into it.

If you're capable of reading it despite having a serious sad that the series is now entering its final year, pay special attention to the excellent art by Russ Braun.