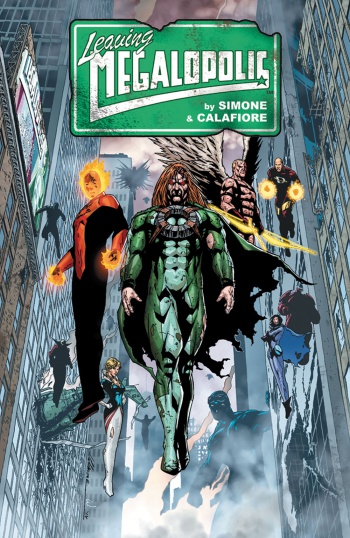 Leaving Megalopolis is a fantastic example of how grim and gritty superhero comics should be done.

It's not an exaggeration to say that, for the most part, readers are a little sick of grim and gritty superhero stories. Maybe it's because there are too many dark comics, but I suspect it's that there are too many bad dark comics. For every Watchmen, we have dozens of hardened superhero protagonists avenging their families, murdering surrendering villains, or always being the best at what they do. (And what they do involves unnecessary violence.)

That's a big part of why Leaving Megalopolis feels like a breath of fresh air. Sure, it may be the darkest graphic novel produced by Secret Six's Gail Simone and Jim Calafiore yet. It's set in an apocalyptic wasteland where an insane superhero could show up at any moment and disembowel a supporting character. But it provides an excellent cast of characters who engage your attention right away. It's written with a love of superheroes in mind, even as it critiques the dark state they embody. It's also filled with well-written twists and gorgeously realized artwork that always make for a fun read. And now that the Kickstarter project has been reprinted as a Dark Horse Comics graphic novel, you can see for yourself why it's an invaluable addition to your comic book collection.

Leaving Megalopolis is set in a universe where superheroes exist, but have gone completely insane. Now the city of Megalopolis, once the safest place on Earth, has become a wasteland where powerless humans are brutally murdered at the hands of their beloved heroes. The good news is that whatever drove the heroes insane keeps them trapped in Megalopolis, unable to cross the city's borders. The bad news is that escape means braving superheroes who won't let anyone leave, not to mention the rare civilians who form an alliance with them. 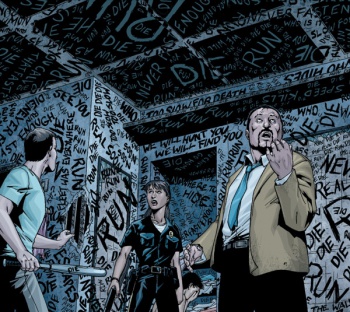 On the surface, Leaving Megalopolis is a "What if" story taking grim and gritty superhero violence to an apocalyptic extreme. It's certainly not the first to do so: Irredeemable and even Marvel Zombies covered similar ground. But where those books dealt with fallen superheroes, Leaving Megalopolis focuses squarely on ordinary humans, individuals with no powers and personality types we can easily recognize. With a few exceptions, the deranged superheroes aren't characters as much as an omni-present threat that can emerge that any time.

It's an obvious direction when you think about it, but focusing on civilians over superheroes is actually pretty rare. Most "superpowers gone bad" stories either have another hero save the day (Irredeemable, Injustice), or revel in the insane destruction these beings are capable of (Marvel Zombies). That's not happening here; these very vulnerable characters have to rely entirely on themselves and their struggles are absolutely horrifying. The tricky part is balancing a cast of engaging human characters with the flashier superhero designs comic book readers are familiar with. On that score, Leaving Megalopolis does a fantastic job. Each survivor has their own identity and personality, while the crazed heroes are a very believable threat.