Looking at the box, the Jokerland construction set looks like nothing short of a grade-A premium LEGO product that's perfect for Batman fans. 120 dollars. 1037 pieces. Eight mini-figures. A freaking Batmobile! It'd be hard to blame anyone for assuming that its contents add up to something awesome. Sadly, while the Jokerland set has everything it needs to be great, the end product is less The Dark Knight and more of a Batman and Robin. 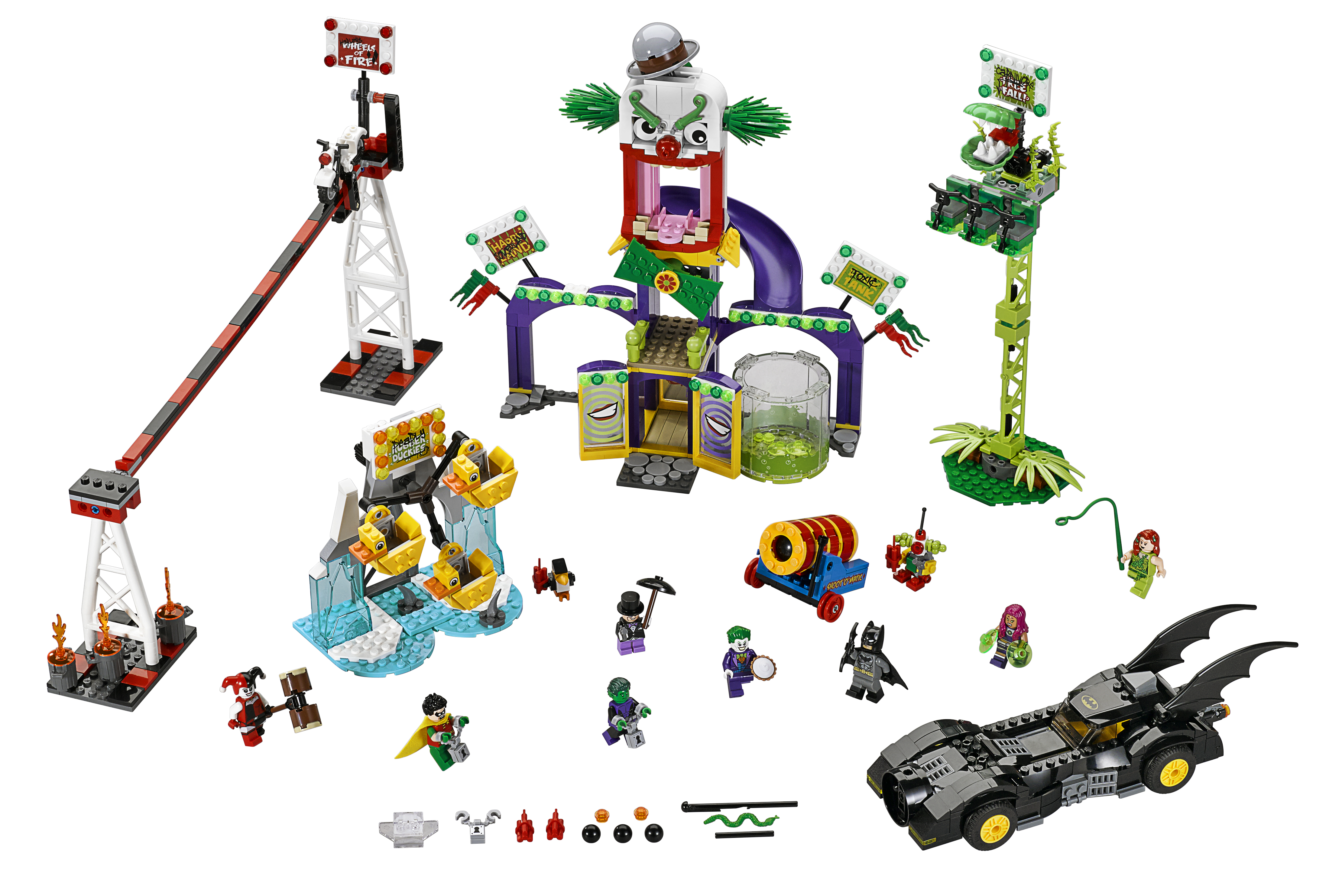 Designed around the concept of a trap-filled theme park run by Batman's rogues gallery, the set is split into five primary sections: four attractions and the Batmobile. At first glance, the attractions are really nifty. You get a Poison Ivy Drop Ride, a Penguin-themed Ferris wheel, a Harley Quinn Motorcycle Stunt and Joker Fun House. On their own any one of these would be fun to play with and all four of them packaged together? It's a big set set and my inner-child was practically screaming at the prospect of taking it for a test run.

Unfortunately, the set's lofty goals are also its undoing. 1037 pieces sounds like a lot but, it's not really that much when you split it across five unique sections and some additional smaller extras. The bricks are spread so thin that most everything in the set feels flimsy. The worst of the bunch is easily the Penguin Ferris Wheel which falls apart at even the slightest of provocations. There were cases where just moving it from one room of my house to another was enough to trigger a catastrophic crumble that would force me to waste time reassembling it. I tried letting my daughter play with it and the results were very much the same. I heard the words "Daddy can you fix it?" more times in that half hour than I would have ever imagined possible. When you play with LEGO, of course, you have to expect that, sooner or later, something's going to break. I just wasn't expecting it to break that much.

This wouldn't be such a problem if the set had some use as a showpiece but, sadly, it stumbles there as well. Its aesthetic problems are much the same as its physical ones. With its pieces being spread so thin, there simply aren't enough bricks to produce the level of detail that makes other sets so nice to look at. The real shame of it, too, is that it didn't have to be that way. If the set had simply included a few more pieces or dropped some of its less useful sections or extras, it would have had more than enough to make the finished product both sturdier and nicer to look at. The barely working cannon and robot goons? I could have done without those. Likewise for Harley Quinn's Motorcycle Stunt which frequently doesn't work and falls apart almost as easily as the Penguin Ferris Wheel.

None of this is to say that I don't appreciate the ambition that was clearly driving Jokerland. Just looking at its contents, it's clear that someone at the LEGO Company wanted to make a grand scale Batman product. I'd also be remiss if I didn't praise its good points. Its Batmobile is really quite nice and could easily have been a smaller set on its own. The Joker Fun House section also sidesteps many of the set's overarching problems. It has some nice bits of detail and is designed solidly enough to survive actual play. If you enjoy the actual process of working with LEGO bricks, you'll also get a nice lengthy build out of this set. It took me just shy of four hours to put the whole thing together. The ultimate problem though is that these positives aren't anywhere near enough to merit the 120 dollars that Jokerland is currently selling for. There are simply better DC Universe sets in LEGO's line-up that are more deserving of your time and money.


Bottom Line: An expensive set that's unattractive to look at and more fragile than fun.