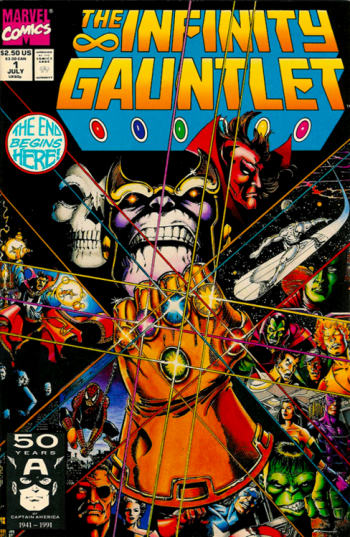 In the middle of the film's ending credits, The Other fearfully explains to his still-unseen master that humanity will not fall as easily as he'd predicted: "To challenge them," he stammers, "is to court death." At that point, any Marvel Zombie worth his No-Prize could tell you exactly who he's talking to, but the Big Bad turns to reveal himself anyway: a massive figure, clad in regal armor, with purple skin, glowing eyes and a distinctive ridged chin.

Thanos. The Mad Titan. Not only one of the most well-known and powerful Marvel villains, but one of the keystones to the cosmic/magic side of the Marvel Universe.

Thanos was originally created by writer/artist Jim Starlin in 1972 as the nemesis of Drax The Destroyer (both characters debuted in Iron Man #55, with their conflict continuing through appearances in multiple issues of other Marvel books). At first, Thanos' big hook was that of an all-in-one bad guy. Not only did he wield magical and super science weaponry, he was also a hulking bruiser that could physically out-fight all but the strongest of Marvel's superhumans.

His (eventual) backstory is a doozy. A native of Titan (a moon of Saturn), Thanos grew up feeling gloomy and ostracized owing to his decidedly non-Titanian physical appearance (more on that in a bit) and became basically the most powerful (and literal) version of an Angry Goth Kid ever. Remember that line about "courting death?" Well, while some withdrawn youngsters develop a fascination with death, Thanos is in love with Death. See, in the Marvel Cosmology, the Embodiment of Death (yes, as in The Grim Reaper) is a woman and Thanos has a crush on her. Christening himself "The Ultimate Nihilist," he resolves to spread death and destruction across the universe as a tribute to his Mistress Death. (Please take note of the fact that, despite seeming to be a skeleton, in adherence to Comic Book Design Logic "Mistress Death" still somehow manages to have breasts.)

Starlin has openly acknowledged that Thanos and Drax both drew heavy inspiration from Jack Kirby's then recent New Gods series at DC Comics (Thanos is, to be charitable, essentially a Marvelization of Kirby's Darkseid character), but that connection soon got even stronger. While regarded as a major work that was ahead of its time, and a huge integral part of the DC Universe mythology today, Kirby's New Gods never really took off sales-wise and the series was canceled. Kirby was wooed back to Marvel to undertake an even more out-there idea called The Eternals, which would allow him to turn his fascination with Erik Von Daniken and the "Ancient Astronauts" theory that had already informed parts of the "Thor" mythos up to eleven.

The Eternals posited an expanding roster of superhuman characters who were among the results of experiments conducted by gigantic aliens called Celestials five million years in the past, experiments that also jump-started life on Earth created an enemy superhuman race called The Deviants. Originally conceived as a stand-alone series, Kirby's Eternals (which, like New Gods, proved a little too bizarre to catch on in a big way) and their history was soon integrated into the cosmology of the Marvel Universe. The Celestial's experiments were revealed as the root cause of various mystical/monstrous phenomena on Earth and beyond, including the genes responsible for giving Mutants their powers. While the Titanians were retconned into being another strain of Eternals, Thanos' deformity was due to his possession of the Deviant Gene mutations.

Exactly what Thanos' place in the Marvel Movies will be is unknown. He's certainly a formidable foe for the all but inevitable Avengers 2, but Marvel has indicated that its next big wave of new movie franchises will be focused on cosmic/magic/outer-space characters, which The Mad Titan would almost certainly be a key part of. If you want to play the Guessing Game, here's the main thing to look for ...

Apart from his obsession with The Cosmic Cube ("The Tesseract" in the movies), Thanos' big recurring storyline in the comics involves The Infinity Gems, a set of six magic stones of immense reality-reshaping power held by various powerful figures in the Marvel Universe. Like any good multi-part relic in genre fiction, they're individually powered and color coded: Soul (Green), Time (Orange), Power (Red), Mind (Blue), Reality (Yellow), and Space (Purple). If brought together and affixed into an armored glove called The Infinity Gauntlet, they would give its wielder the power to ... well, it kind of does whatever the writers say it does, much like The Cube.

The original Infinity Gauntlet story by Jim Starlin is considered the Thanos story and one of the benchmark epics of Marvel history. So, if you see multicolored stones suddenly being treated as really, really important in upcoming superhero movies (a prop of The Gauntlet itself was displayed without explanation at Comic-Con two years ago, and was among the background-clutter of Odin's Vault in Thor), now you know what they're probably building toward.

Bob Chipman is a film critic and independent filmmaker. If you've heard of him before, you have officially been spending way too much time on the internet.