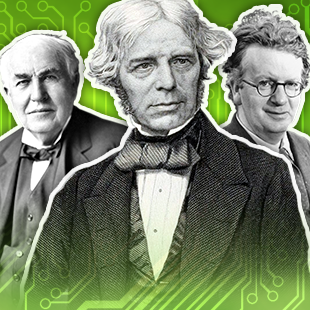 When we were first asked to pen a guest blog for The Escapist on the top all-time heroes of technology, we found ourselves with a problem: who to choose?

So many people have put forth amazing devices and advanced mankind's understanding - choosing our own top five would be like asking necessity to select her favorite inventors!

(Get it? Because necessity is the mother of... never mind.)

We spent a lot of time in brainstorm and debate, and though it was tough, we were able to come up with our five favorite tech heroes of all time. Some are to be expected, and some may come as a bit of a surprise. Some are well-known, and others are relatively obscure. That said, in our minds, these are the five people without whom technology as we know it would have been most held back.

Sit back and tip a hat or a beer to these five - we owe them all a debt.

Born into a blacksmith's family in England during the Industrial Revolution, Faraday was an unlikely candidate to advance the world's body of knowledge. He received very little formal education, and even after lucking into a job at the Royal Institution, Faraday ran afoul of his boss (famed chemist Humphry Davy) and was forced to ignore entire areas of research for fear of being fired!

Despite these handicaps, the clever Faraday was the first to build an electrical motor and the first to create electrical generators. He also first described the concept of electromagnetic fields. Without Faraday's work, neither electrical systems nor cars could have ever been invented. How's that for a foundation?