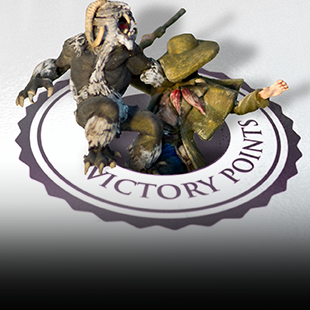 Today we are going to talk about some of the basics of another 32mm heroic scale skirmish miniature wargame, Malifaux. Produced by Wyrd Games, the game was born in 2009 and has steadily been gaining popularity since. It's in the same space as Warmachine and Hordes, but uses very different mechanics and playstyles. The game takes place on an Earth-like world in the victorian era, complete with magic, machines, goblins and a healthy dose of frontier cowboys. Players run a master and a crew or gang in an attempt to secure the world's magic resources, Soulstones. The denizens of the world are rather eclectic, drawing inspiration from real world history to make up their back stories, and the game world's narrative has advanced as its own alternate history. New versions of crew masters, new story and plot as well as new factions have all been introduced. The game also parallels a tabletop RPG called Through the Breach, lending it a rich, deep and ever evolving story.

Malifaux itself is both a city-state and a world in a parallel dimension. The discovery of the parallel world first occurred in 1787 after the start of the decline of magic and magicians in our world caused them to search for a new source of magic. On the other side of a thin veil lay Malifaux, and a breach was created to break into this newly discovered world. 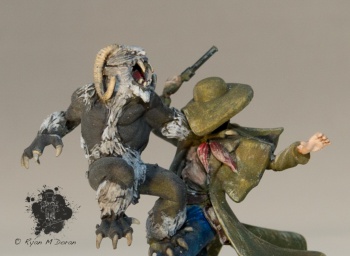 The magic users of our world decided to attempt to open a breach to this new world, and in the process destroyed everything around the ritual site. In the aftermath the breach was born and a new equilibrium was found between the two worlds. The world of Malifaux itself was much like our own, but uninhabited. This became the new frontier, and boom towns sprang up surrounding Malifaux as interested parties searched for soulstones and traded in magic. As exploration continued, new discoveries were made. This included the Neverborn, creatures of pure nightmare akin to demons, the magic of resurrection, and soulstone powered machines like golems. There was a period of time when the breach destabilized and collapsed, only to reopen spontaneously several years later. Now, along with the main breach, several smaller unstable breaches have begun opening as well.

There is a heavy emphasis on the feel of a railway era world, with steam engines and outlaws everywhere. Many bandits and lawmen don dusters, cowboy hats, revolvers and boots iconic of the time period. Combined with the presence of what would be most appropriately compared to demons, monsters, and magicians the game world has a very unique atmosphere. It's very Weird West shootout feel that it works well with the skirmish setting.

Recently, Wyrd has released the Malifaux 2E line. This is an update to the game not only in rules and story advancement, but a huge step forward in the miniatures they produce. One of the most common materials miniatures are made out of is white metal, and Malifaux was no exception to this. Plastics, however, are normally easier on players to carry around, paint and modify. The 2E line carries a series of new miniatures and crew boxes comprised of high quality plastics. The kits themselves are highly detailed, and come in multiple pieces. The game is set to 32mm heroic scale, which is slightly larger than most other tabletop miniature games. This means the game pieces are a little bit bigger, and can carry more detail. It is perfect for a game where the average force size is relatively small.