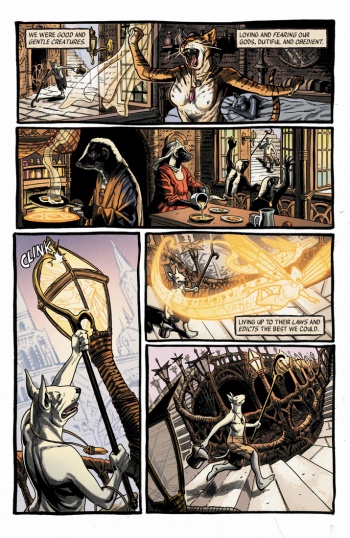 
Senior Editor Ross Lincoln says: Take The Wind in the Willows, mix it with Watership Down, and throw in a heavy dose of The Lord of the Rings and The Once and Future King and you're somewhere close to Tooth and Claw. An epic set in a magical world filled exclusively with anthropomorphic animals, it concerns the terrible after-effects of an attempt to bring a long-vanished champion back into the world to deal with a horrible crisis. Read it.

But while co-creator Kurt Busiek's writing is, per usual, excellent, it's the art by Ben Dewey that really stands out. Dark, grim, bloody, yet almost pastoral, it's textured and gorgeous. This new series is essential for anyone calling themselves a fan of comics, and Dewey's art is some of the best in the entire medium since P. Craig Russell.