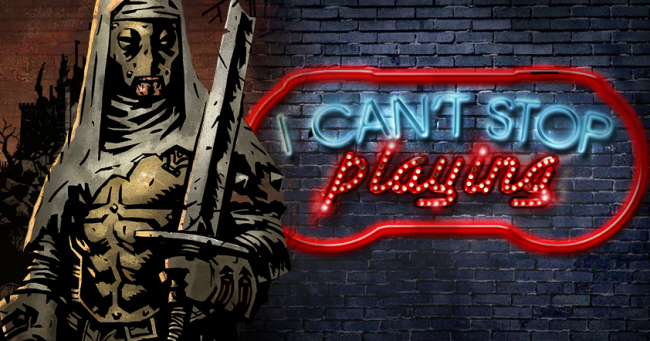 I'd heard some chatter about Darkest Dungeon over the last year since the Kickstarter was successfully funded, but I didn't find the time to check it out until very recently. After days and days of late nights and early mornings, leveling up my heroes, treating their various ailments, losing some favorites to permadeath, and occasionally summoning - and promptly fleeing - hellish Lovecraftian monsters, I'd sunk almost 35 hours into an Early Access game in the course of a week. It's far from complete, to be sure, but the core gameplay is there, and it looks to be the start of something truly special.

Darkest Dungeon isn't just about dungeon crawling for loot and experience, instead putting a heavy emphasis on the psychological effects of such activity on those brave enough or foolish enough to take up the endeavor. Keeping your characters alive is only half the battle while delving these dungeons, as your heroes endure stressful situations, such as traps or critical hits, and their stress meters - a measure of the psychological damage they've endured - rise. Mental health isn't the only worry, either, as there is an array of debilitating diseases and character quirks that you can pick up in the depths, which only go away after a week-long recovery in the Sanitarium. From Necromania to Black Plague, these effects can redefine your characters and force you to rethink your entire battle strategy in order to accommodate the new flaws - and occasionally strengths.

You'll start by assembling your team from the adventurers the Stage Coach brings each week to the hamlet you're using as your base of operations. There are currently an impressive 13 classes (Editor's Note: The original article incorrectly stated that there were 10 classes, when there are 13 currently in the game. Credit for correction.)in the game, with each class having a very distinct style based on their abilities. The Leper is a front line fighter capable of cleaving two front-rank enemies with Hew, or clear a stack of corpses with Purge in order to bring a back-rank enemy to the fore and making it accessible to the Leper's attacks. The Highwayman, on the other hand, is primarily a ranged fighter, using Grapeshot Blast to whittle down three targets at once, Pistol Shot to deal significant damage at range, and reserving the Open Vein for finishing off foes in the front.

You'll need to coordinate the classes making up your party, as each hero takes up one of four ranks, from back to front, and abilities have restrictions on use based on the rank of the hero in the party. The Plague Doctor is best near the back, where he'll be able to use his Plague Grenade and Blinding Gas abilities, while the Crusader prefers to be near the front so he can utilize his Smite and Stunning Blow abilities. With several skills to choose from on each class, you can customize their preferred position to some extent, allowing you to maximize potential based on the preferences of your other adventurers. When your healer - the Vestal class - is tucked into the back row, you probably want to switch out her default Mace Smash ability, which isn't usable from the back of the group.

Once you've selected the right party for your dungeon run, you'll have a chance to buy provisions to make the experience slightly less terrible for the heroes. Your basic essentials are food, torches, and shovels, the importance of which we'll discuss shortly, but you'll be able to buy a handful of other, less useful items like bandages as well, if you so choose. As you venture through the dungeon, your party will need to eat or suffer severe consequences, and your torchlight will fade over time, so it's helpful to keep a few extra torches on hand. You can buy Skeleton Keys as well, which will help you avoid traps on locked chests and cabinets, as well as garner some extra loot from them. Finally, Shovels are critical, since clearing blockades by hand hits your entire party with a little damage and scary amount of stress, which can effectively shut down an in-progress run. It's so detrimental to progress, in fact, I've started bringing several with me every run just to be safe.


When you embark, your party will be dropped into the first room of the procedurally-generated dungeon. Each dungeon is a collection of rooms connected by corridors, which you'll navigate while attempting to complete your objective. Starter level missions, like "Complete 100% of Room Battles" and "Explore 90% of Rooms" are fairly straightforward dungeon crawls. The bosses mix things up a bit, though, as you'll not only have to find the boss before your party's taken too much punishment from the rest of the dungeon, but you'll also have to sort out the trick to defeating many of them. Objects like chests, cabinets, and shrines to dark entities are strewn about the dungeons, which can offer positive or negative outcomes, such as loot rewards, positive character traits, debilitating diseases, or even Lovecraftian hellbeasts eager to consume the very souls of your party members. Inventory space is strictly limited, though, so you'll sometimes end up doing a balancing act trying to bring home as much loot as possible. The further into the dungeon you go, the more tempting it can be to drop supplies to make room for loot, but, as the insightful narrator says, "A pack laden with loot is often short on supplies."

Whether it's the sense of accomplishment every time a character survives long enough to level up, or the sheer terror when your best hero is on Death's Door with a Bleed effect active, the fact is, I can't stop playing Darkest Dungeon.