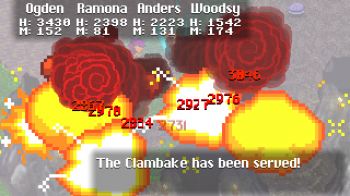 The game also incorporates a monster capturing system, a la Dragon Quest V, that allows you to add enemies to your party. It's a nifty feature to have, but it's not as useful as you'd want as the main cast will generally be more effective than your monster allies. It's nice to have the option and it comes in handy during an extended bit where the main cast is split up, but it's more of an ancillary feature than anything else.

Other parts of the game will also be less than appreciated. Book II boasts ship combat sequences, for instance, that are clearly well-intentioned but also never amount to much besides a boring diversion from the main experiences. Likewise, the game's Bounty system falls short of its potential. Wherever you go in the game you'll encounter people with problems that need solving. If you agree to help them you'll be given a side quest that in turn can earn you cash and items in reward. On paper it's a smart way to expand on the game's content. In practice however, it never really amounts to more than busy work and fetch quests.

The game's combat, while solid in mechanical terms, can also at times be a bit too easy. You'll face the occasional baddie that might take a moment or two to wear down but, all-in-all, most encounters, boss battles included, are a breeze. In turn, retro fans hoping for something to kick in their teeth like the good old days might walk away a tad disappointed.

Perhaps the one element of the game that can't be criticized is its presentation. Muteki has flawlessly recreated the look and sounds of 16-Bit era. You could play alongside any of the old classics and it wouldn't look out of place. The music too, while perhaps not as immediately iconic and memorable as the titles it's mimicking, is generally well done and always fits the mood. It's worth mentioning that the pixelated visuals suffer from some stretching if played on a big screen TV, but if you're playing on a smaller set or the Vita, you shouldn't find anything to complain about.

In many ways Dragon Fantasy Book II is an ambitious undertaking, aiming to revisit and recreate one of the most beloved periods in console role-playing games. The fact that it's not entirely successful is disappointing, to be sure, but nonetheless, Book II remains an entertaining experience that retro gamers and RPG devotees would be hard pressed to dislike. It has an inherent charm that helps lift it above the mire of its issues and, at the end of the day, it manages to be a fun game with a lot to enjoy. It might not stand as tall as the classics it emulates, but it's hard to fault it for getting lost in the shade of giants.

Bottom Line: Technical flaws and narrative shortcomings aside, Dragon Fantasy Book II is a fun, retro-inspired RPG that hits the notes it needs to.

Recommendation: Plain and simple, this was made for hardcore and old school RPG fans.

This review is based on the PS3 version of the game.