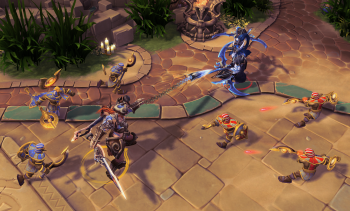 But back to criticism. For a game so focused on teamwork and cooperation, it is surprising that Heroes lacks in-built voice chat. While you can coordinate reasonably well simply by using the minimap ping feature, there are often times that that doesn't convey the degree of precision you need, and having to stop to type out something can be a disastrous time sink. Of course, voice chat leads to a whole new world of toxicity, which Blizzard has made an active effort to avoid, such as by denying you the ability to talk to the enemy team, but that's what the mute function is for. Voice chat was a failed feature in StarCraft 2 because StarCraft 2 is not a team-based game, Blizzard - don't let that failed venture make you give up on voice chat in a game where communication is vitally important.

Lastly, I'll hit upon a subject that very much falls under the "your mileage may vary" category, but I'm not overly fond of Blizzard's pay model. Heroes is free-to-play, but with microtransactions that allow players to purchase XP and gold boosters, cosmetic items, and heroes. Costs feel like they're a little too high. While you can play Heroes without ever spending a dime by purchasing heroes with in-game gold or simply sticking to the half-dozen heroes on free rotation every week, there are a limited number of inexpensive heroes, and new heroes will sit around 10,000 gold for a very long time before being discounted. It would take roughly a month of play, at one hour a day (just enough time to complete daily quests for their high gold reward, since playing more than that has almost no further gold gain) to be able to accumulate that much gold, and heroes will be released once every three weeks, according to Blizzard's plans - so the average player will never be able to afford to keep up with the amount of heroes being released without spending real money.

A 10,000 gold hero can be purchased for $10. You can argue that's less than a monthly MMO subscription fee, but in an MMO, you're paying for access to a huge amount of content - an entire game world with dozens, even hundreds of quests and events. $10 for a single hero feels steep in comparison. As for the cosmetic items, those can only be purchased with real money - an option to pay with gold, even a huge amount of gold, would be appreciated for those players who have no desire to purchase new heroes - and their prices range from $5 to $15 - again, for just one skin for one hero. I'm not opposed to the microtransaction model in principle, but when you calculate how much $60 can buy you in Heroes, it doesn't feel like you're getting your money's worth relative to just flat-out buying a game for the same price. An option to unlock all (or most) content in the game for $60 would be welcome - the closest thing is a $40 bundle that gives you eight heroes and six cosmetic items, which effectively values the entirety of the game at about $180, given you're unlocking roughly one-fifth to one-quarter of the content for $40.

All that said, Heroes is a quality product. The entirety of the game is delivered with typical Blizzard production values. It looks great, it sounds great, and it feels great, and in a genre that typically suffers from "you get what you pay for" production values, the higher costs may be justified for you.

Bottom Line: Heroes is perhaps the most accessible MOBA ever created - which can either be a good or bad thing for you. Regardless, you're getting Blizzard-level production values - at Blizzard prices, if you choose to spend money. For what it is, Heroes is a great game with some room for improvement. Whether "what it is" appeals to you or not is a matter of personal preference.

Recommendation: If you couldn't get into other MOBAs, Heroes may be the MOBA for you. If you're a hardcore MOBA player, you may feel that Heroes is "dumbed down." At the very least, it's a game that all gamers should try.