Warhammer 40,000: Deathwatch - Tyranid Invasion Enhanced Edition is a bit of a long title to say, so I'll stick with Deathwatch for the sake of our word count. This game apparently was too intense for certain mobile phones, draining away the battery and lagging regularly. The PC user that tends to power grind their way through video game campaigns will see that this game was definitely a phone port. Fortunately, the mobile game was a solid enough experience that it's translation to the PC wasn't a flop. The simple and compact gameplay still manages to be entertaining - the game developers of Rodeo Games should be proud of their accomplishment here. 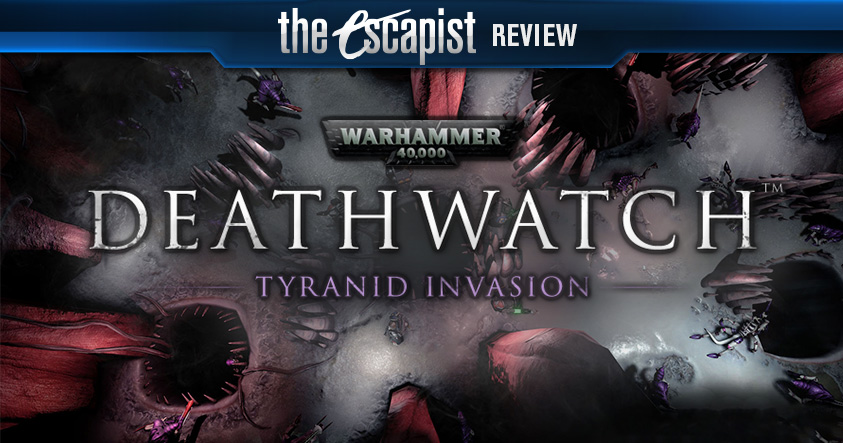 The objectives in the game are as follows: Go stand over on the tile marked with a big skull insignia, defend against waves of monsters, carry this item to the skull insignia square. Good job. You win.

There's a bit of strategy in carrying this out though, and a fair amount of turn-based tactics to enjoy while you do it. The player needs to learn and understand the strengths and weaknesses of each squad member and use that to survive in the missions. Assault units, Tactical units with Veteran and Champion subtypes, Devastator Units, and Apothecaries all have their own abilities and advantages to consider. Each squad member has a limited amount of "action points" per turn, which means you have to be tactful and considerate of what you're doing. If an enemy comes into view, you ought to kill it as soon as possible because the tyranids become stronger in packs. Skill trees are limited in variety. Abilities are different depending on the squad member's class, but three main stats of accuracy, health, and critical chance occupy beyond that. But the weapons and items customization makes up for what the skill trees lacked. There's a bit of variety in loadout choice - guns like plasma weapons have the risk of burning out after use. Devastators have big laser cannons, assault space marines have axes and chainswords they can wield. It might not seem like a big deal, but in the middle of battle the right loadout makes a huge difference. The flamethrower is more overpowered than you might think at first glance (I recommend getting at least one squad member equipped with it.) Three difficulty settings provide some replay value, although veteran and heroic are locked until you beat the campaign on normal.

The port feels like an iOS game. They even left phrases like "tap the cards to reveal them" - instead of rewriting it as click for PC. I'm certain the game developers decided to bring Deathwatch to the PC from mobile because of fans expressing interest in it. Those fans likely wanted a game based on the characters and story of Deathwatch, not a straight copy of it. With the limitations of iOS and mobile devices removed, the PC had more freedom to explore and expand on the Deathwatch experience. To see it limited as just a port from mobile instead? Well, that leaves a lot to be desired. The in-app purchases from the mobile version are absent from the PC port, but the points system used to buy card packs of different wargear and space marines is still there.

If you were expecting cutscenes or intense voice acting work, it's fairly limited. There's a narrator, the soldiers you control, and the enemies. An small game doesn't really have any room to tell Shakespearean sonnets in it, but there's some life to your squad members. It's entertaining to switch out certain squad members for others to hear the different dialogues that can come up during the battle. "Tell me Space Wolf. Is it true you spend your nights howling at the moon?" one squad member banters to another. There are nine different acts, four missions in each of them - not too short, but the game could've added more acts for the PC version. "Enhanced Edition" Deathwatch mostly means it throws in some extra items to collect from the card pack system.

One of the most noticeable downsides of the gameplay was the camera. It doesn't focus on enemy movement at certain points, calibration of that isn't adjusted properly for certain situations. In the middle of a fire fight, sometimes the camera doesn't remember it's supposed to move where the action is - instead focusing on just one bad guy while you can hear the sounds of shooting off in the distance. The only thing you can do is wait for the enemy turn to end and hope everyone in your squad survived.

The quality of the graphics is sleek and smooth for an unreal engine 4 game. Not much slow down happened during my playthrough on a considerably average computer rig. The map set pieces are incredibly detailed, and clearly a lot of thought was put into the making of the models. The character models for the soldiers are similarly detailed. The axes and guns are individually modeled in their hands, and the insignias of the different Space Marine chapters of the Warhammer 40k universe are visible on the squad's armor.

This game really seems to be meant for fans of Warhammer who have some time to kill and want to get another adventure in that universe. But as someone who never had a chance to play with the world before, this game was able to provide a surprising amount of entertainment and action. The variety of weapons and upgrades you'll come across is enough to keep things interesting, as you're going along a more focused gameplay experience. Very little technical glitches or errors, if any at all. The downside here is that it's a port of the mobile game, and that may catch people off guard when playing it for the first time.

Bottom Line: It's a port of a solid mobile game, but the transfer to PC lost some of that luster in translation.

Recommendation: This one might be better for on-the-go gaming or in short bursts.