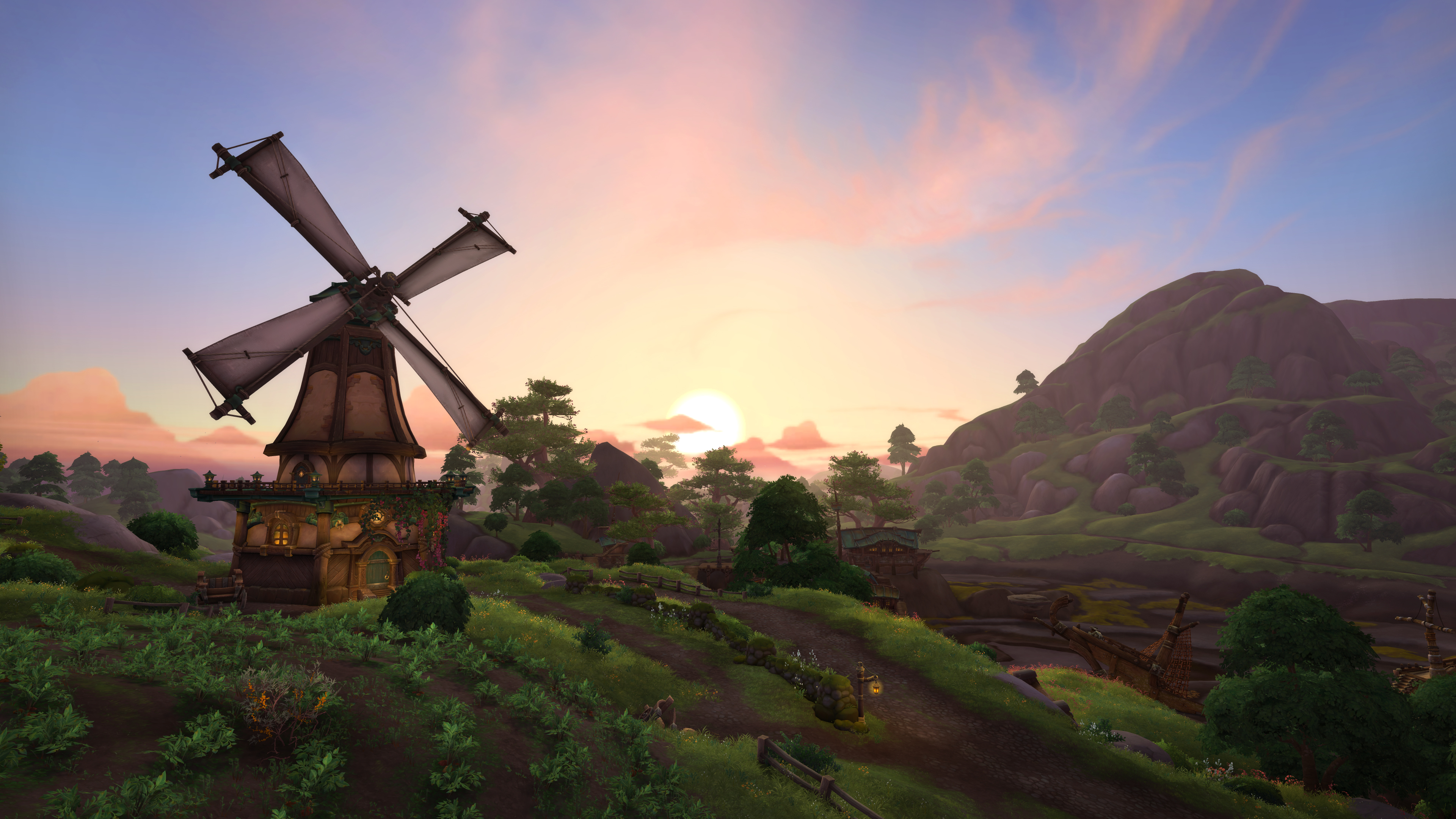 In World of Warcraft: Battle for Azeroth the pending apocalypse may not be canceled, but it's temporarily tabled so that the Alliance and the Horde can focus on gathering resources and making new allies to continue fighting the war that has been raging throughout the game's 13-year history.

The storyline in World of Warcraft's previous expansion, Legion, ends with a bang. The world-conquering demon lord Sargeras gets in one last parting blow by plunging a massive sword into the planet Azeroth. Early in World of Warcraft: Battle for Azeroth, players learn that while Sargeras was defeated, his final attack still has the potential to destroy the world. Unfortunately both the Horde and Alliance are too busy fighting each other to care.

WoW's long history is both a boon and a challenge for Blizzard. Battle for Azeroth fleshes out areas and plots going back to the original Warcraft series while also making it clear Blizzard hasn't forgotten about the events of the past six expansions. The war between the Horde and Alliance may never truly end, but they've repeatedly come together to face some greater threat. Even as Battle for Azeroth drops players into a bloody, seemingly irreconcilable conflict it shows the way towards reconciliation with orcs and humans coming together to save the planet they both live on. That's a journey that's going to take years to reach, and so far it's a lot of fun. 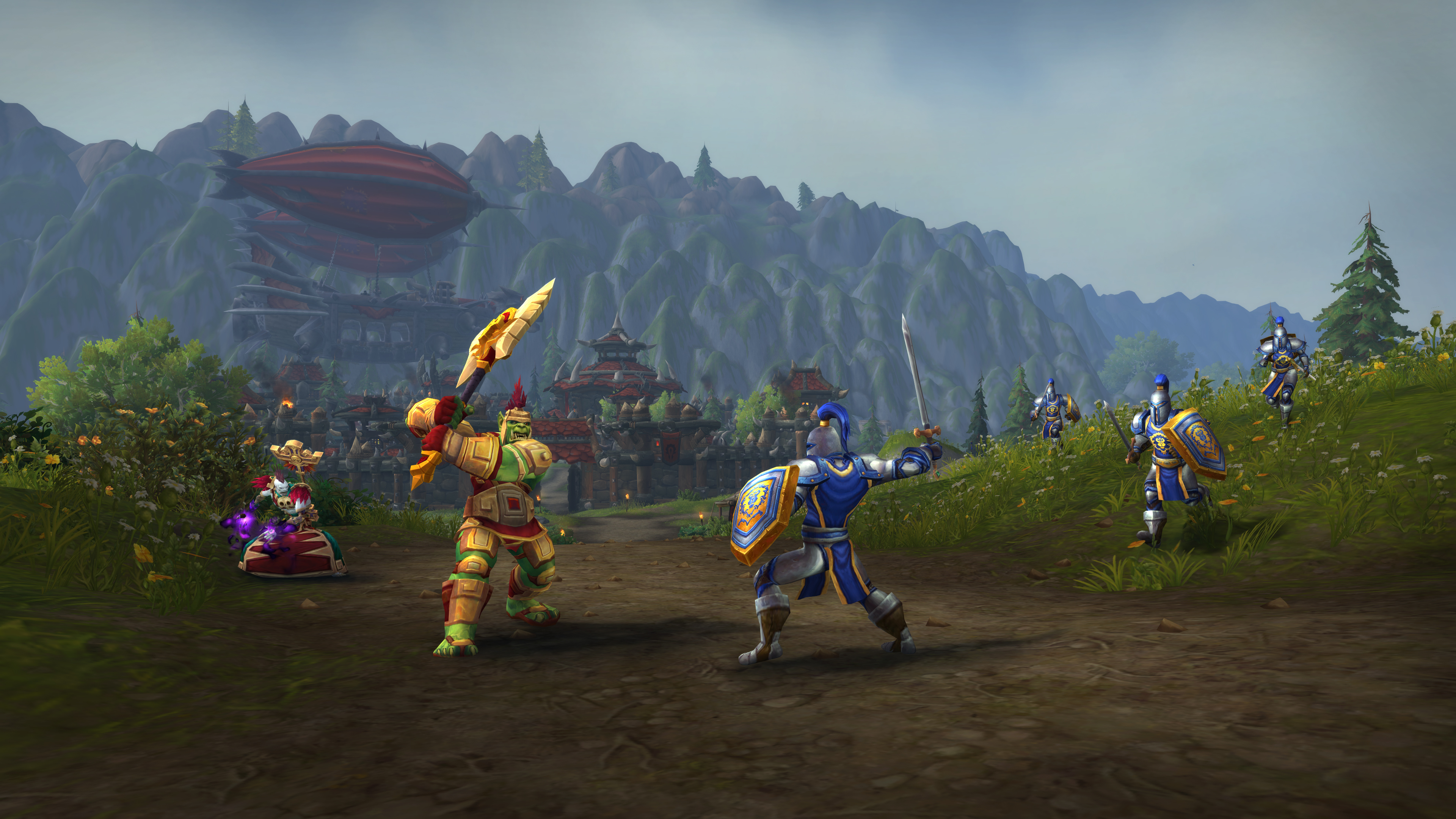 While the past few expansions have largely seen both factions exploring the same content and rubbing shoulders at a neutral home base, Battle for Azeroth segregates them to two islands: the troll empire of Zandalar for the Horde, and the human Admiralty of Kul Tiras for the Alliance. While players establish footholds on the other faction's territory as they level, there's perhaps never been a more enticing time to play characters from both sides to experience the rich stories and beautiful zones.

WoW's cities have always been impressive works of graphic design but were typically relegated to places to train and pick up daily quests. In contrast, the new capital cities of Zuldazar and Boralus seem to have taken inspiration from the Legion endgame zone Suramar City. They're sprawling locations filled with danger and intrigue. Making new allies embroils both factions in power struggles within their nation's leadership that have impacts that go well beyond each island's shores. The Cthulhu-like Old God N'Zoth has been causing problems in WoW since Cataclysm, and his influence is particularly heavy in Battle for Azeroth. There's an incredibly unsettling dungeon filled with rotting monstrosities that threaten to break free and corrupt the lush, dinosaur filled jungle above. Horde forces skirmishing with an Kul Tiras coastal town are shocked by the ferocity and cruelty displayed by the humans there, particularly their leader who wears a foreboding cephalopod mask. The action-packed fantasy setting mixed with an undercurrent of madness and betrayal makes the game's story an enjoyable blend of pulp and Lovecraftian horror.

Players have a good deal of freedom to determine where they explore first, though the fact that some options open up based on level rather than how much of the story you've completed can leave things feeling disjointed. I knew blood trolls were causing problems in Zandalar, but hadn't bothered to dig into it yet when an unrelated quest ended with a traitor to the throne declaring his allegiance to the blood troll god. After that, I decided to take a look at what the blood trolls were up to, already knowing the outcome. Still that's a small price to pay for being able to take a break from their foreboding swamp to go help some cute fox people trying to eke out a living in a desert infested by snake cultists. 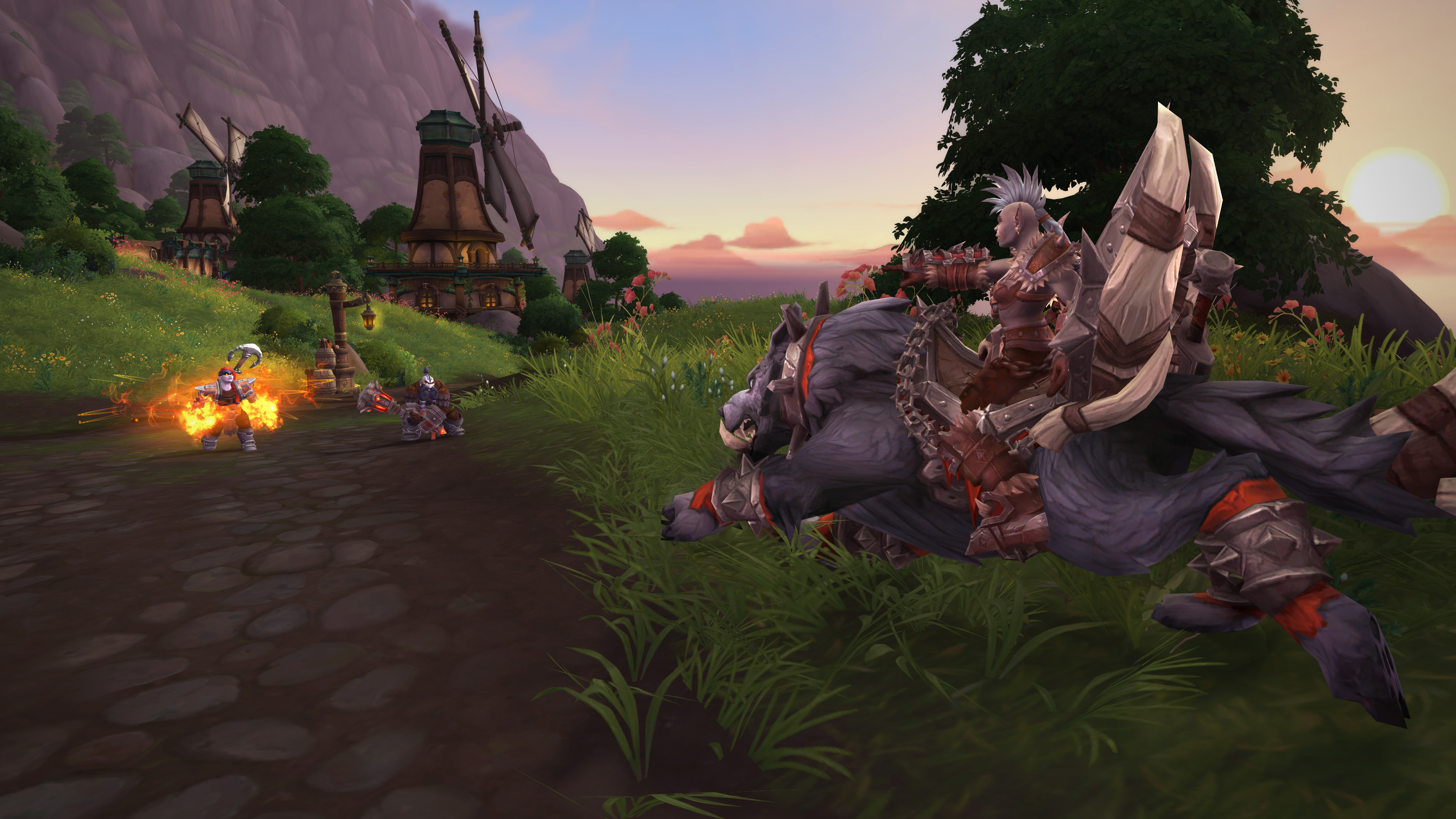 Even amongst the dramatic cutscenes telling stories of betrayal and loss, WoW's signature goofy humor keeps things light. In a nod to Stranger Things, you can adopt a baby faceless horror named Dart. You might have an empire to save, but Horde players will spend a surprising amount of time trying to get dinosaurs to mate. In Kul Tiras there's an extended quest line inspired by Darkest Dungeon. That levity also helps distract players from the fact that the standard quest format of gathering and killing X number of things hasn't changed.

Under the hood, Battle for Azeroth builds on some of the mechanics introduced and refined by Legion, but with mixed results. It's always been weird to discard hard-earned epic gear at the start of a new expansion but that's especially true in Battle for Azeroth, where characters are replacing legendary weapons wielded by the game's greatest heroes. In exchange, Battle for Azeroth provides new gear powered by Azerite, the blood of Azeroth itself that's now flowing freely thanks to Sargeras' sword. The upgrades on the starting versions feel paltry by comparison, though the release of the game's first mythic dungeon could do a lot to catch up. 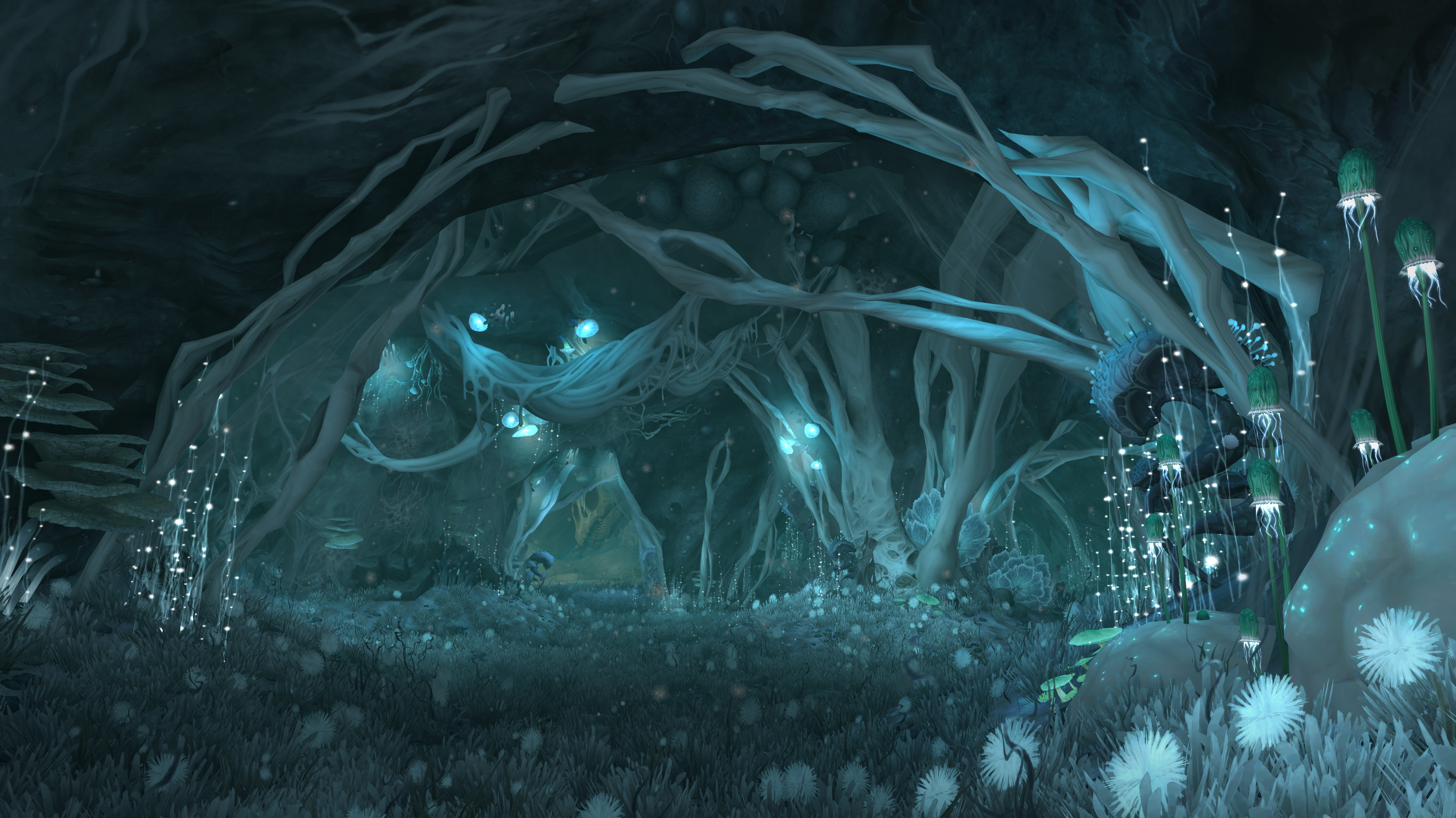 Tuesday saw the addition of Warfronts, where 20 Horde or Alliance players team up to gather resources for their war efforts and raid enemy bases without actually having to fight other players. Despite the concept of Battle for Azeroth bringing deadly conflict between the factions, Blizzard doesn't want anyone to miss out just because they don't actually like fighting other players. Gone are the PvP servers that were once littered with the bodies of characters murdered by their betters. Instead each individual decides whether they want to be open to fighting other players and can pop back to their faction's home base if they need a break from the stress. The proffered bonus XP wasn't enough for me to want to watch out for rogues, but it's nice to have the choice.

Another reason it's good that Blizzard is keenly aware of WoW's history has nothing to do with plot. Legion was wildly successful while the previous expansion, Warlords of Draenor, was one of the game's biggest failures. Both started off strong, but Warlord of Draenor couldn't keep players subscribed months after launch because it didn't provide enough new content. There's a lot more story promised and hinted at in Battle for Azeroth and the question is whether it will be good enough to keep players invested in fighting for Azeroth's future until the next expansion comes out.

Like so many players, I go through cycles with WoW, picking up every new expansion and then gradually becoming disenchanted with the endgame grind. I didn't witness the defeat of Sargeras when it happened, but thankfully Blizzard provides a way to watch it happen early in Battle for Azeroth to make players feel like they've jumped right back into the story even if they actually took a break for a few months. Battle for Azeroth reminds me why I've kept up with this franchise for 13 years. Its new zones feel filled with secrets and surprises. When trying to pursue a single questline to completion it's easy to wander off attracted by the promise of treasure or a hidden quest hub. Even dying or rifling through piles of junk can have unexpected results. The palace intrigue and dark plots make me want to finish every storyline to see what happens rather than just to unlock items I'll want for improving my character. Any review of WoW is inherently a work in progress, with the full scope of the expansion taking years to reveal. But Battle for Azeroth has me hooked again and I look forward to sharing more of my thoughts as the war rages on. 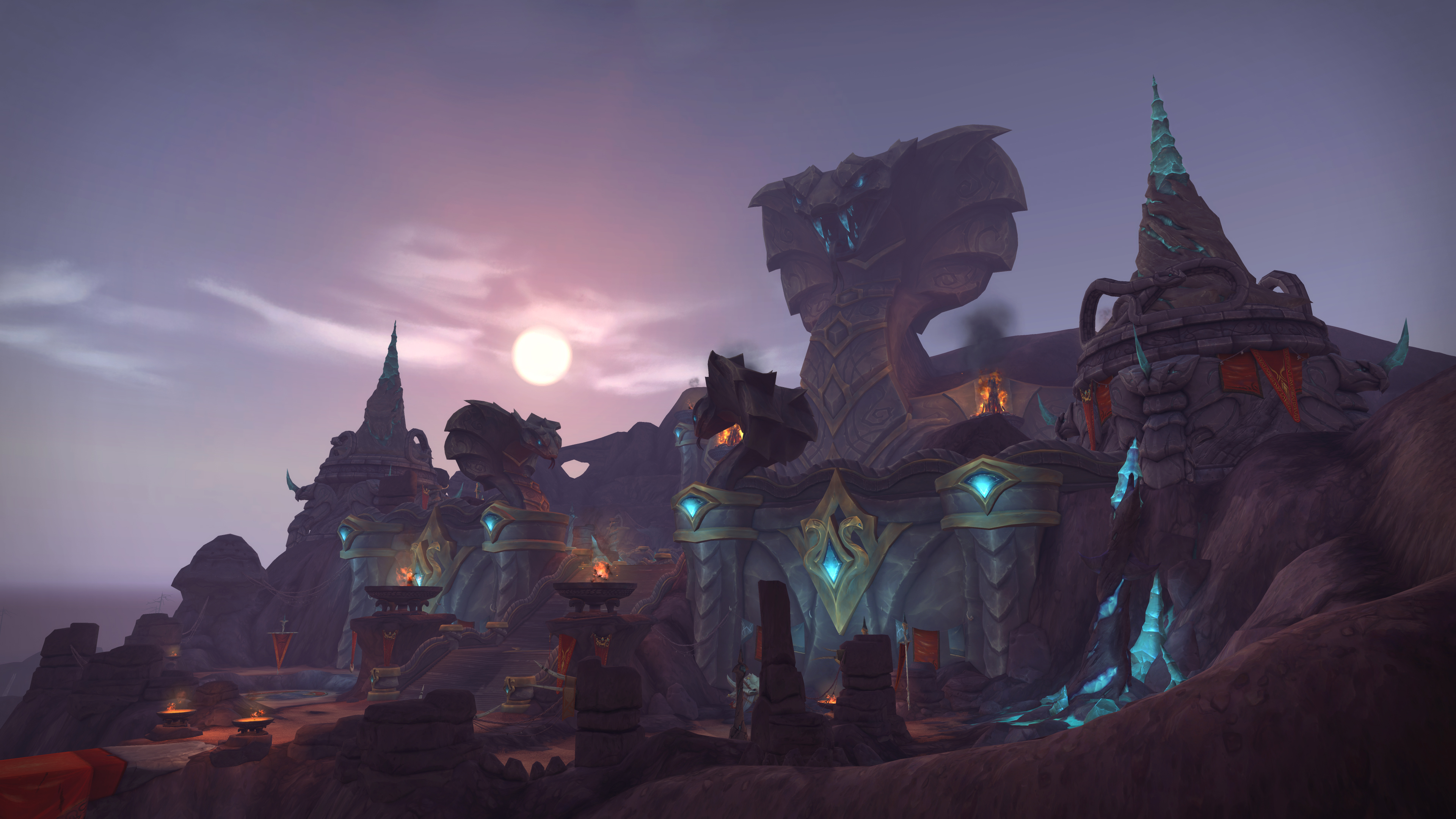 Wide appeal. Minor flaws that can be off-putting.

This game was reviewed on PC using code provided by the publisher.

Escapist Magazine reviews products based on how well they achieve their overall artistic vision, and what lasting benefit they provide to humanity. Relatively enjoyable products may score low on our scale; conversely products might score high even if they're aren't much fun.

1 - Undeniably unfinished, broken, or devoid of value
2 - Complete, but with inexcusable flaws.
3 - Suitable for a hardcore fan; otherwise few redeeming virtues.
4 - Some bright spots, but overall a failure of vision.
5 - Gratifying, but has little lasting value.
6 - A strong entry in its category limited by significant flaws.
7 - An excellent experience un-diminished by occasional flaws.
8 - Wide appeal. Minor flaws that can be off-putting.
9 - Very nearly perfect.
10 - Perfect. An undeniable classic.