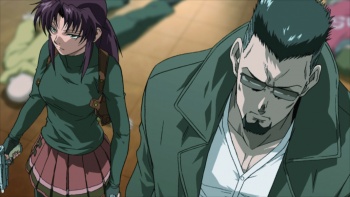 After a rousing series of adventures during Black Lagoon, Roanapur is again a hotbed of activity as the employees of the Lagoon Company continue to shoot their way to big bucks in Black Lagoon: The Second Barrage. With its leader Dutch, tech genius Benny, gunfighter Revy, and diplomat Rock, the Lagoon Company accepts jobs from criminal organizations that often makes them targets of rival criminal organizations. But Second Barrage breaks that "Deliver cargo A to point B while fighting group C" process with the introduction of new jobs and other attempts to improve the winning formula of Black Lagoon.

Black Lagoon was a series of connecting episodes that developed Rock's reluctant adjustment to his new criminal life amid intense adventures. Now that Rock is settled into his new life, Second Barrage instead focuses on the Lagoon Company accomplishing jobs. With three jobs divided into 12 episodes, Second Barrage plays like three separate Black Lagoon movies with each job serving as the plot. Everything that happens during each job stays within that job. Minus the Lagoon Company's involvement and an online chat, nothing connects one story to another. Since nothing develops throughout the series, the show simply stops instead of ending. As a series, Second Barrage comes off as disjointed.

But the three stories in Second Barrage are great when viewed individually. Each job has its own tone and references to live-action cinema. One story contrasts the undisciplined masses of bounty hunters versus the precise coordination of the Russian mafia when tracking down a pair of twin homicidal maniacs. The focus on Balalaika's ruthless efficiency over the Lagoon Company's involvement is a nice change. Another story features the Lagoon Company assisting a klutzy counterfeiter wanted by a variety of Roanapur's skilled and greedy assassins. The eccentricities of the assassins and the gunfighting eventually becomes self-parody as the violence escalates and starts to feel like, well, a cartoon. The final story is a tragic Yakuza tale where honor contrasts with personal feelings as a seemingly innocent schoolgirl suddenly finds herself thrown into a war between her Yakuza family and the Russian mafia. It is surreal how the traditional values of classic Yakuza films still fit into the contemporary times of Second Barrage. No matter the job, each story is wonderfully told from engaging beginning to a finale that ends in a bang.

Gunfighting is the source of most of the action, which means a heavier emphasis on Revy and her unbeatable gun-fu. The action scenes are highly stylized and well-choreographed as Second Barrage manages to pit Revy against people armed with pistols, shotguns, knives, chainsaws, flamethrowers, and even a giant sword. Every gunfight plays like a beautifully violent ballet set to an orchestra of gunshots. But focusing on gunfighting means nearly eliminating the naval combat - a unique attribute of Black Lagoon - that emphasized strategy over firepower. Consequently, Dutch and Benny along with their conversations onboard their PT boat hardly appear in Second Barrage.

One thing that remained unchanged during Second Barrage is Rock's moral compass. Having experienced both sides of right and wrong while serving as a foil to the amoral criminals he associates with, he empathizes with most of the damaged people he encounters who could have turned out differently under better circumstances. These moments make Second Barrage more than mindless action as it becomes even more tragic when the people Rock sympathizes with meet their fate.

The English and Japanese language tracks fare equally during two of the stories in Second Barrage. The Japanese language track suffers while striving for accuracy during the Yakuza story. When with the Japanese, Balalaika and Revy speak English while Rock translates. The thick accents of the Japanese voice actresses ruin the intended gravity of their lines. The English dub keeps parts of the original Japanese dialogue and uses some creative script adaptation to maintain the characters as foreigners while keeping the serious tones of those scenes.

Even if the Second Barrage series is not as well executed as Black Lagoon, the blazing action and Rock's unique heroism still make Second Barrage an entertaining anime to watch. It might have fared better to release each Second Barrage story as individual movies instead of lumping them as a season. At least viewers would not have to sit through the ending and opening sequences between episodes.

Bottom Line: Black Lagoon: The Second Barrage continues the Black Lagoon series with a trio of stories and the same stylized action prevalent in the preceding season. The sum of the parts is better than the series as a whole.

Recommendation: Watch the stories as separate movies instead of a continuation of Black Lagoon for some wholesome violent action.

Tom Tonthat would convert to the Church of Violence in a heartbeat. He also wishes a belated farewell to Yoshito Usui, creator of the wonderfully crass Crayon Shin-chan.

Taking Anime Cosplay On Its Own Terms Liana Kerzner 3 Comments