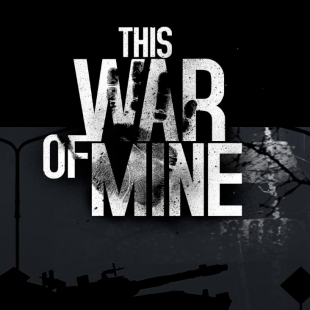 When I first saw the trailer for This War of Mine, I found myself particularly interested in this indie game being created by Anomaly developer 11bit Studios, especially since it felt very much like it could be the first game in recent memory to approach the issues surrounding war from a different perspective. Anyone who's paid attention to world news and the unfortunate situations in the Middle East knows that war is complex, with many repercussions for those directly or indirectly involved. Unfortunately, most games that touch on the topic of warfare have a tendency to sanitize the whole experience, in part because they limit you to a single viewpoint (typically that of a soldier). I was excited to see that someone was attempting to look at armed conflict from a different angle than what we've now seen ad nauseum.

For those of you who may be hearing about this for the first time, This War of Mine is a survival game that takes place in a fictional city, caught in the middle of a civil war between government forces and separatists. The ideology of either side isn't an important part of the game (at least in the demo I played), as your primary focus is on keeping a small group of civilians alive until the conflict ends - something that, even in the real world, won't happen quickly or easily. Your band of survivors comes from various walks of life - some with special skills that may come in handy - but they're all regular people, rather than soldiers. They're more interested in staying healthy and getting a good night's sleep somewhere safe versus calling in an airstrike on an enemy bunker.

We've done a few preview pieces on the game before, but recently, 11bit gave us a chance to check out a limited press build of the game to see how it's evolved over the past few months. I jumped at the opportunity to check it out and see firsthand how exactly the game would treat the complex matter of being a neutral party in a war-torn city, and kept track of my choices in a notebook. 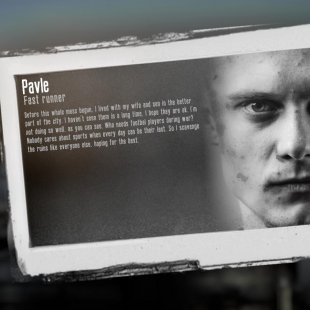 I start the game briefly introduced to the three civilians I'd be trying to keep alive for the next fortnight; Bruno, Marko and Pavle, each featuring a trait such as "Good Cook" or "Fast Runner." I skim through their biographies (some are still placeholders), but in regards to Pavle, I get a glimpse into who he was before this war broke out - a professional football player and a local celebrity, although now he's separated from his family and just hoping to make it day to day. I chalk it up to his good health as to why Pavle starts off the game in good shape; Bruno apparently got himself injured before arriving at this shelter and Marko is starting to feel sick - a dangerous sign, given the lack of any semblance of actual medical care in a city full of snipers and homeless refugees.

The house these three have moved into is in rough shape, and the first order of the day is to clear out the rubble and see if there's anything useful stashed away. Searching through some cabinets and lockers, I managed to scrounged up a good starting pile of food, medicines, and building materials that I'll undoubtedly need in the days ahead. Unfortunately, some of the rooms in this house are locked, and since I don't have the means yet to open them (lock picks and crowbars are items you can build later on), I'll have to hope I won't need whatever's hidden away in them for a while.

When night comes around, it's time for what is probably the important task in This War of Mine - sending out someone to scavenge for supplies. A map comes up showing the local area around your shelter, along with a handful of places that are open to explore and some basic details on what kind of supplies are likely to be there. There's also info on whether there may be other people around, for good or for ill; it's a war torn city, after all, and not everyone is likely to be friendly. You're limited to sending a single person out to scavenge at a time, and the civilians that stay behind either sleep or take up guard duty in the hopes of warding off anyone that might come poking around.

Although he's a little sick, I send out Marko as his main trait is that he's a skilled scavenger, and can carry more items in his pack than either Bruno or Pavle. I pick a nearby cottage as my first stop, only to find that is actually partially on fire when Marko arrives. I briefly wonder if this might not have been a good choice - I know from earlier experience with this game that encounters with other people can be troublesome, but I'm not sure if environmental hazards are something you'd have to worry about. Luckily, the place stays together as I guide Marko around and look through the place for goodies. I prioritize food and medicine, but grab some building materials like wood and components just to make the most of my visit. If the place shows up again, I'll make another supply run to grab what I had to leave behind, but I'm happy with what I've managed to grab so far.


With a good haul from scavenging and some supplies to spare, I give Marko some medication in the hopes it'll help take care of his minor illness before it becomes a problem. I have enough food to feed everyone at least one meal for the next few days, but since I've just about gathered up everything of use in my shelter (at least, everything that's not locked up), there's not much else for my civilians to do other than wait for the sun to go down. 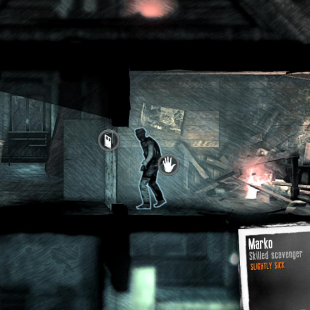 I am fortunate to have enough spare wood and components to build a bed, which Marko makes use of as soon as it's ready. Fatigue is a major problem in This War of Mine, if your civilians sleep poorly or not enough, they move slower and take longer to work on projects (if they don't outright refuse due to exhaustion). I'm not sure if it'll also make them more susceptible to injury or getting sick, but I opt not to take the risk.

That night, I send Marko out to the cottage from earlier, still burning slowly but thankfully intact enough for him to grab another backpack full of wood, components and scrap metal. I do encounter someone else picking through the rubble for supplies, though - a small rat that first appeared as a pulsing red blip as it moved through a nearby room Noise levels are indicated as ripples that flow from its source, and paying close attention to where these ripples are can help you get an idea if you're alone in a location or if you're about to run into other people. If you're not careful, though, you can alert others to your location as well. You can imagine the small relief I felt that Marko's first encounter out exploring was with something relatively harmless.