As a long-time fan of Borderlands, Gearbox's new creation Battleborn has a lot to offer for both single player enthusiasts and multiplayer shooter aficionados.

In the week leading up to New York Comic Con, 2K hosted a preview event for the upcoming shooter Battleborn, offering the first hands-on with the single player/co-op story mode. While it's certain that many folks will be more interested in the multiplayer aspect, which I can say is surprisingly fun, even for those of us who aren't typically into competitive shooters, Gearbox brings its know-how to the single player campaign with its trademark dark humor, and cartoony aesthetic.

There's a lot going on in Battleborn, which is hardly surprising given the 25-character roster, but it's easy enough to get started, and the complexities you'll learn along the way. In true Gearbox form, your characters each have a distinct personality and unique playstyle. If you want to be a frontline fighter, but prefer nimble strikes over brute force attacks, you can try Rath, who's not exactly a vampire, but is basically a vampire. He's fast and deadly, and drains life from enemies on every hit, which is the only way he's able to stay in the fight, since he lacks robust defenses. The armored Caldarius is able to keep his distance with his energy blaster, but isn't afraid to get up close and personal, where he can utilize his wrist-mounted energy blades to unleash powerful melee attacks. I'm more of a ranged fighter, since I'm terrible at keeping my sights on enemies strafing around me in close quarters, so I prefer Marquis, a robotic butler most capable as a long-distance sniper. His other abilities help him keep enemies at range while he picks them off with precision strikes. 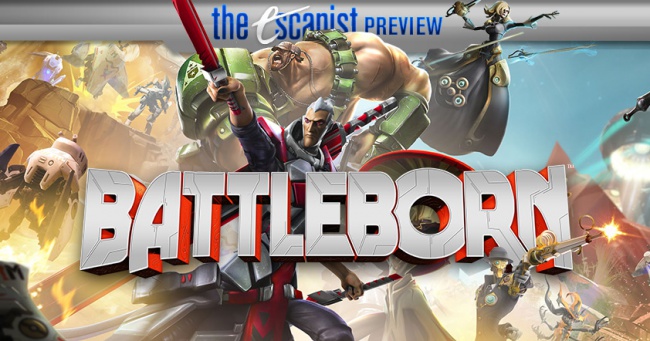 There's much to be said about balancing 25 distinct characters in competitive multiplayer, but I was most interested in the story mode, since Gearbox has an excellent track record with its far-out narratives as per the Borderlands series. In Battleborn, you're watching the death of the universe, and must band together to stop the sinister forces responsible for the death of millions of stars, and the impending death of the last remaining sun.

As the story goes, we're talking about the actual end of the universe and everything in it, which is kind of a big deal, so every bit of humor packs a little extra punch in the context of imminent universal doom. There's no open world which, at this point in my gaming career I'm actually thankful for, since I can only clear so many outposts and establish so many strongholds before it gets tiresome. You'll instead embark on individual story missions, which can be played solo, or co-op, either split-screen or online.

Since losing a mission doesn't have any permanent negative effects, and practice makes perfect, you might find yourself overwhelmed the first couple of runs. I only got to try out one of the missions, but if it's indicative of what you can expect from the rest, be prepared to retune your strategy virtually every time. The spawns are mostly consistent, so you can push through a story mission by trial and error, or you can play it safe and take it slow. You'll have limited respawns available to you, so it's usually not too hard to push through the level, but it is possible to find yourself playing a character poorly suited to take on the level's boss, making it all but impossible to actually win. It can be frustrating, but, as with Borderlands, it's more fun in co-op anyways, and having that backup will almost always let you claim victory. Unless everybody's playing a character that's a terrible matchup for the boss, in which case you'll just want to start again, picking a new character that can stand up more readily to the level's challenges.

The challenge you'll find in single player will depend on a combination of your personal skill, your character choice compared to the enemies and bosses thrown at you during the level, and your tendency to loot boxes. Containers are prevalent through the level, and can contain anything from powerups to extra points to health orbs. You don't need to grab them all, of course, but being willing to take a moment to hit a few containers along the way will certainly help ensure you're at your peak when it's time to weather the worst of the storm. You've got a limited number of respawns on each mission as well, so finding a few extra lives might mean the difference between success and failure.

The boss in the level I played was an enormous mechanical spiderbot, which presented a number of challenges across the three stages of the fight. In co-op, it wasn't too much of a challenge, since its attacks were primarily directional, and one player could keep it occupied while the other player hammered away at it outside its attack arcs. It gets new, more powerful attacks each time it powers up, so the third and final stage you've got to look out for a lot more damage coming from all directions. The adds that spawn are mostly just a nuisance, but can occasionally ping you at just the wrong time, keeping your shield from recharging and offering the boss a chance to finish you off.

There's a metagame going on in Battleborn as well, with perk loadouts offering both collectibles and combat buffs. The lasting loot you collect is in the form of perks, which have the standard rarity scale representative of each perk's power level. I liked stacking the cooldown reduction perks, so I could use my abilities as often as possible. Activating a perk in a mission requires you to collect and spend shards, but it becomes active for the duration of the level once you've turned it on.

You'll have a player level as well as individual character levels, which give the grinders something to look forward to. I'm a bit of a grinder myself, so I'll be looking forward to seeing what the higher levels have to offer. Leveling up a character, for example, opens up new ways to customize your skill progression. There's always a binary choice in the game, however, so you won't be able to access both the default upgrade and the unlocked upgrade at the same time, though you can switch between them between matches/levels.

Battleborn is quirky fun, as you'd expect from the makers of Borderlands. The breadth of character types is impressive, especially given how incredibly unique each of them seems to play. Whether you're looking for a new, highly-stylized multiplayer shooter or a solo/co-op campaign to play with friends, you'll likely appreciate what Battleborn has to offer. Hardcore shooter fans, of course, may well prefer to stick to the more realistic titles, since the accessible and forgiving nature of the gunplay does make even less-skilled players a threat in the arena.