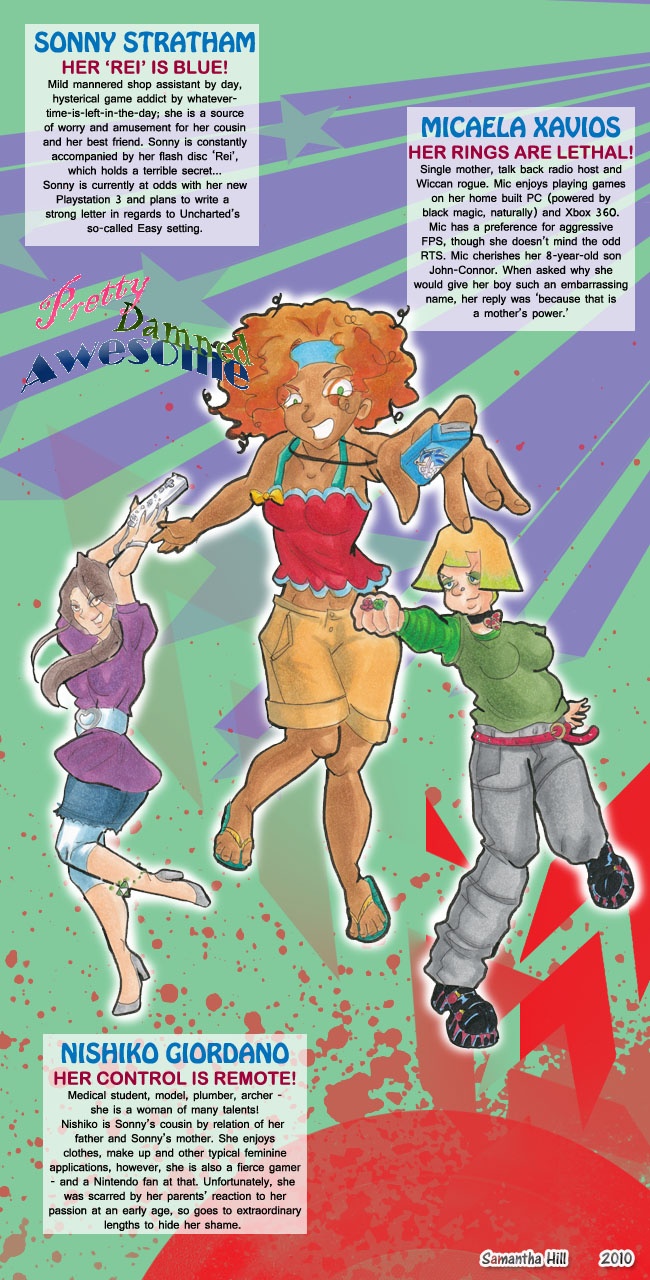 Comic Description:
PRETTY DAMNED AWESOME Follows the adventures of three gamer girls, who personify Sony, Nintendo and Microsoft; Sonny (age 21) is energetic and eager to please, Nishiko (age 19) manipulates her surroundings behind a sweet smile, and Micaela (age 25) is aggressive and pragmatic. Sonny is a university drop out making ends meat as a shop assistant at C-Mart. Sonny has always been a people pleaser, though this career path has gradually taught her to dislike her fellow human. If they are human. When Sonny plays her games, her imagination goes into overdrive, placing her in the role of the title characters. She is also a member of the local chapter of the Sonic Under-Underground, the Sonic resistance dedicated to reviving the hedgehog to his former glory. Nishiko has adored video games from an early age. She and her twin brother would secretly swap presents every Christmas, so she would get the games, and he would get her Barbies. When their parents finally discovered the deceit, they dismayed by their little girls outting, but not entirely surprised by their son's. Nishiko has fostered the image of the perfect fashionable genius, and just isn't ready to come out to the world as a geeky little Mario fanatic. Micaela is a gothic and practicing Wiccan; she currently doesn't belong to a coven. Mic was knocked up at age 16 and was promptly kicked out of home by her father. Mic worked odd jobs, including a comic book shop, where she met young Sonny. Mic is a popular morning talk back host, encouraging her listeners to question authority and destroy all gyms. She wears 2 rings: a sharp green emerald in the shape of The Sims diamond and a ruby skull of Mario. I've had the concept for the comic for several months, however this is the first time I have produced finished artwork and comics for Pretty Damned Awesome. The comic is inked with copic multiliners and sakura microns, and coloured with dozens of copic markers. They are then scanned and edited with Photoshop CS4. I can produce up to 3 comic pages per week. I apologise for the crappiness of the logo. If I am accepted I will work on a superior version, unless a more experienced employee of the Escapist would like a crack at designiong it. Thank-you for your consideration :)
Comments [202]