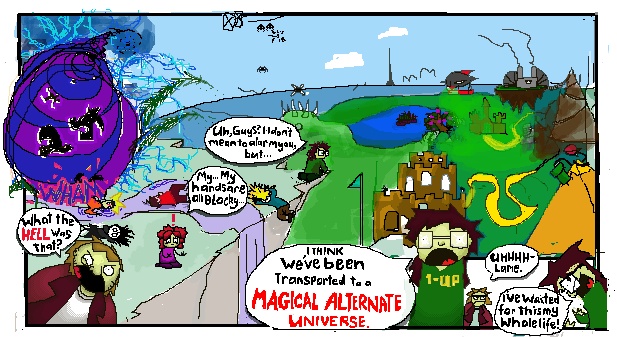 Comic Description:
"The Chronicles of Bitworld" is an action-adventure-comedy comic about a group of teens who are sucked into a portal that transports them to a twisted, yet strangely familiar land. Turns out, they're in a world entirely based on video games! Who'da thunk? But it seems they were brought here for a reason, and they don't have time to get comfortable: A vague and terrible evil is spreading across Bitworld, and it's up to them to save their new home and find a way back to reality, before it's too late! They do this, predictably, by going on a rollicking adventure quest to gather the nine enchanted artifact-gems-stone-things scattered in various themed locations across the land. Y'know. The usual. Some of the characters shown in the preview, along with the strange ancient artifacts they find themselves weilding: Jeremy Fisher ("I've been waiting for this my whole life!"). A lover of all things virtual, Jeremy is in his element from the time the portal first dumps him into Bitworld- Convincing him to ever go home could be a problem. Artifact: A scroll, giving handy-dandy HUD info on anything they come across, giving him the master strategist seat. Lewis: Second comic, on phone. Granted a pair of shoes that give him incredible agility, allowing him to jump incredible distances, run across walls, and even jump again when in the air. Pauline: Lewis' girlfriend. Given some kind of staff thing, but has been unable to use it due to constant kidnappings. Is getting tired of the Damsel in Distress bit. Trent and Denton: (On top of attacking Bowser, second comic.) The jerks of the party. They're just in this for the kicks, attacking the main group as much as they help them. Each one has a controller: Trent uses the power of his to latch onto creatures, allowing him to control their very motions. Denton, on the other hand, uses the sharpened prongs of the N64 controller as a terrifying whip-trident thing. Denton complains that Trent is overpowered constantly. Hale: Second comic, big guy, "I don't like it." An enigma: He seems to have been trapped in bitworld as a kid long ago. Carries a giant backpack: Seems to have super strength. Rose: (second comic, put on Hale's shoulder because of injury.) Her personality? She doesn't say anything. Easy to write for!She's taken in by a roving band of voiceless protagonists later on. Her Gun artifact expands into a wide arsenal of weapons for every occaision, and gives her regenerating shields. The idea is that, although references to games (Both specific video games and general parody) would be all over the place, the reader wouldn't have to understand every single obscure reference to get it. The plot focuses on a group of teens who are as confused and bewildered by this strange, in-joke filled world as the viewer, and their attempts to come to grips with it make up the tale. In essence, if done right, "The Chronicles of Bitworld" would have action, laughs, and let everybody learn a little something about themselves.
Comments [202]