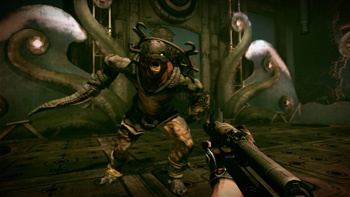 Id Software believes that the reason everybody thinks PC gaming is dying is simply because it’s changing.

PC gaming isn’t dead, and isn’t going to die, so why does the topic keep coming up? Id Software’s Todd Hollenshead and Tim Willits offer their views on the subject, saying that the PC market is definitely different than it used to be, but that’s not because it’s going under.

Hollenshead, id studio president, aligns any slowdown in PC sales to that of the release of new consoles. He told IGN: “Because of the great games you have coming out on the consoles, and for a period of time, the consoles were pretty competitive technically with the PC, [PC] has receded in prominence. Hollenshead believes: “These things happen over time and every time consoles come out, people proclaim the death of PC and then it may struggle for awhile and have its issues, but it tends to be resilient.”

“It’s probably getting back to the point right now where technically on the PCs you’re going to be able to start doing more and more things that you can’t do on the consoles,” he said. And without new consoles anywhere on the horizon, this may give the PC a chance to get further ahead technically. Hollenshead admits that retail isn’t the same way it used to be for PC games, saying it’s in “third place” behind the Xbox 360 and PlayStation 3, but doesn’t think that means “it’s doomed to continue to recede or can’t come back.”

Id Creative Director Tim Willits thinks the PC market is “definitely changing,” and that the “biggest struggle … is that piracy is out of control.” Willits sees PC gaming going towards “client architectures and cloud gaming” and “games that are more social” as the industry moves to combat piracy. “Look at Facebook,” he says. “There are more people playing that silly Farmville than play Call of Duty.” Hollenshead seems to agree with Willits’ final statement: “PC gaming is not dead, but it is a bit different than it was in the past.”

Compare PC gaming to the other industries. Just because Blockbuster isn’t there anymore doesn’t mean nobody rents or watches movies. Just because nobody goes to arcades anymore doesn’t mean the entire videogame industry is dying. As id points out, the market has changed, and the PC side of it is different now. Everybody is either just buying the new World of Warcraft expansion every two years (or StarCraft every ten), playing Farmville, or buying games on Steam. Not really, but pretty much, right?