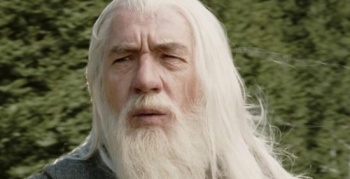 Sir Ian McKellen, also known as Gandalf the Gray, believes that the second half of his year will involve hobbits.

Sir Ian McKellen is confident that work will begin on the beleaguered big screen adaptation of The Hobbit later this year. Speaking on the Fitzy, Claire and Jules radio show in Adelaide, Australia, while promoting his current play Waiting for Godot, McKellen said: "It's in production. The sets are ready, the script's ready and the movie is going to be cast this month. Fans are not to get worried. The films will get made and I suspect we'll start shooting the end of this year."

The Hobbit has hit a number of problems recently. Earlier this month, director Guillermo Del Toro bowed out, and MGM's current financial difficulties, the same ones that delayed the new James Bond movie indefinitely back in April, are preventing things from going forward. With all the difficulties the movie faces, the idea that filming will start in the next few months seems like a long shot.

It's also worth mentioning that Sir Ian has made predictions about when filming would start before, and keeps having to revise them. While I think most of us hope that he's right, it's probably best to see what happens over the next few months before getting our hopes up.