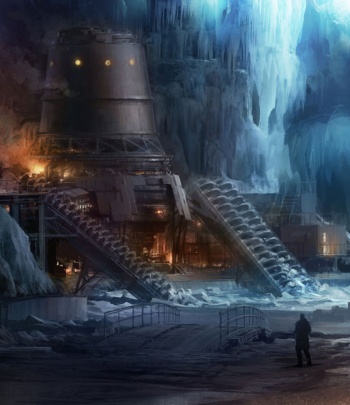 A two hour live-action film based on the Red Faction series will air on Syfy next March.

THQ clearly wants the release of the upcoming Red Faction: Armageddon to be a full-blown media blitz. In addition to the recently-revealed Xbox Live Arcade prequel, the publisher has announced a partnership with Universal Cable to produce a "movie pilot," entitled Red Faction: Origins. The two-hour movie will fill in some of the gap between the Guerrilla and Armageddon games, getting fans up to speed in time for the newest entry in the series.

The story of Red Faction: Origins takes place twenty-five years after Alec Mason freed the Martian colonies. Ten years ago, an attack by vengeful mercenaries resulted in the murder of Alec's wife and the kidnapping of his daughter, Lyra. The intervening decade has left Mason a broken man. His son, Jake Mason, has taken up the family cause and joined the Red Faction. Just in time, one might add, as a new enemy has arisen that threatens to conquer all of Mars. When Jake discovers that his missing sister is a soldier in the enemy's army, the Red Faction's struggle becomes a personal one. Ultimately, Jake must somehow reunite his family in the midst of a war.

Sure, that plot description sounds identical to half of the movies airing on the SyFy network, but there is a decent amount of experience behind the writing staff. The screenplay for Origins was developed by Andrew Kreisberg, one of the men behind Fringe and Warehouse 13, with the help of Paul DeMeo, THQ's Director of Fiction Development and writer of The Rocketeer. There is no word yet on the casting or the director.

THQ was quick to note that Origins is a "pilot movie." The implication, of course, is that we might get an actual television series if the pilot rakes in enough cash.

Red Faction: Origins will air on the SyFy network at some point in March, 2011. The next game, Armageddon launches the same month for the Xbox 360, PS3, and Windows.

Judging By The Cover: How Does Bloodborne Hold Up? Yahtzee Croshaw 73 Comments