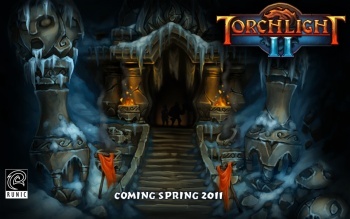 Dungeon crawlers rejoice: Runic Games has announced that Torchlight 2 is in the works.

Torchlight was a hit, and for good reason: The team at Runic is made up of veterans of games like Fate, Diablo and Mythos, so it's fair to say that they know which end of the action-RPG genre is up. And while a forthcoming sequel may not be an Earth-shattering surprise, it's welcome news nonetheless.

Torchlight 2 will expand on the "whimsical and quirky world" of the original game and add several new features to the action, most notably multiplayer. Players will finally be able to adventure with their friends both online and over LANs, while a free peer-to-peer matchmaking service will make it easy to embark on journeys with other gamers of similar skill levels.

The new game will take players from the town of Torchlight to the Estherian Steppes and across the continent of Vilderan, following clues left by the missing Alchemist, who was attempting to find and defeat the mysterious force that destroyed the Estherian race. Aided by the Guardian-warrior Syl and the remnants of the Estherian Guardians, the player must confront and battle dark forces of evil every step of the way to protect the world as we know it from complete annihilation.

Other new features will include an improved interface, overland areas with weather, time of day effects and randomized events, random dungeons, the return of pets and fishing, and an updated version of the Torchlight editor that will let players create and share mods and new content. Torchlight 2 is slated to come out "initially as a digital download" in spring 2011 and in the meantime, you can learn more at Torchlight2Game.com.

UPDATE: As one or two of you have pointed out, Runic was supposed to be working on a free-to-play MMO version of Torchlight. What happened to that?

"We still are going to make the MMO, but it became apparent that Torchlight 2 was the logical next step for us given the phenomenal enthusiasm of gamers petitioning us for multiplayer," Runic Games CEO Max Schaefer explained in a statement.

"We're so proud of everything Torchlight accomplished, and we feel that Torchlight 2 will not only give the fans everything they've asked for, but far surpass its predecessor in terms of fun, balance, customization, story, and just being a great game to play with your friends," he added. Runic plans to show Torchlight 2 at GamesCom, running from August 18-22, and PAX, which takes place September 3-5.

And now you know.