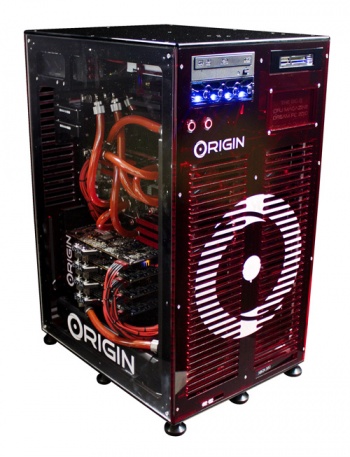 Sometimes thousands of dollars worth of gaming hardware just isn't hardcore enough and you need a whole other platform in your gaming rig.

Are you a PC gamer with thousands of dollars just lying around collecting dust? If so you might be interested in Origin's "Big O" PC, a rig that incorporates some of the finest technology outside of sci-fi movies, and still managed to find room for a liquid-cooled Xbox 360.

For just a smidge over seven and a half thousand dollars, you can get the entry-level model, which has a 4.0 GHz quad core processor, 6 GB of memory and a 2 TB hard drive. If you've got a little bit more to spend - and by a "little bit," I mean nearly $10,000 - you can get a monstrous machine with more cores than you have fingers and four graphics cards. You can also customize the system to better suit your budget, which is handy if you only have, say, twelve thousand to spend, rather than the full seventeen. All configurations come with the 360 though, and apparently you can run both at the same time - good news if you want to try and play two games at once, or perhaps two versions of the same game.

I'm not really up to date with PC hardware, but I'm pretty certain that even the entry-level system is overkill, and will be for years. Not only that, but the Xbox 360 is pretty much superfluous, unless you want to play the handful of 360 games you can't get on PC as well. But if you've got the money to burn, and quite like the idea of a PC that will probably be top spec for the next decade or so, then go right ahead. Just don't be surprised if it becomes sentient and wilful somewhere down the line.