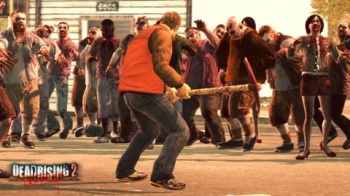 For shambling corpses intent on snacking on your gray matter, zombies are pretty darn popular - or at least killing them is.

More than 300,000 people have grabbed Dead Rising 2: Case Zero on Xbox Live Arcade in its first week. This number comes from the game's leaderboard, which ranks players according to the number of PP - the game's version of experience points - they have earned. The number of downloads, and the game's $5 price tag may have netted Capcom up to $1.5 million in revenue.

Case Zero is a prequel to Dead Rising 2's, and introduces main character Chuck Greene as well as the game's combo weapon system. Your progress in Case Zero can also be imported into the Dead Rising 2, giving you a boost at the start of the game.

Capcom takes demos pretty seriously; Devil May Cry 4 had a very solid, two-part demo, including a battle with one of the game's bosses, and the Resident Evil 5 demo had both online and split-screen co-op. But Case Zero is a little different, an amalgam of game demo, pre-order bonus and a small game in its own right. EA has talked about "Premium DLC" as a way to market games, but Capcom is one of the first to actually give it a try, and it seems to have been fairly successful.

Dead Rising 2 will be available on PC, PS3 and Xbox 360 later this month.