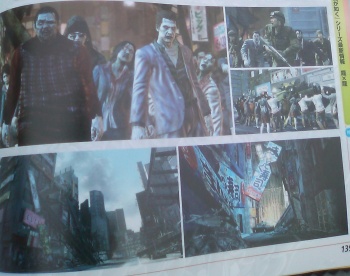 Sega's answer to Grand Theft Auto is soon taking its gameplay style to another level, with zombies.

Yakuza, Sega's Japanese Grand Theft Auto, has gotten a good enough reception so that multiple games in the series have been released, the latest in North America being Yakuza 3 for the PlayStation 3 and Yakuza 4 in Japan. When Yakuza: Of the End was announced by Sega, rumors and images hinted that it'd be somewhat different that previous games, but nobody expected it to add zombies.

Of the End will add zombies though, according to the latest Famitsu magazine. The game appears to be a response to the popularity of Capcom's Dead Rising, and will be somewhat of a departure for the series.

Instead of visiting the batting cages and wandering around as the toughest guy in town, players will have to contend with the undead in the ruined city streets of Tokyo. The game's Kamurocho district is overrun by zombies and quarantined by Japan's Self-Defense Forces, trapping everyone inside that couldn't make it out in time.

Players will control four different characters in Of the End, including previous hero Kazuma Kiryu. There will still be missions to complete and silly mini-games to partake in, but they'll revolve around the new theme of a zombie outbreak. Characters won't have to hold back on their weaponry anymore either, and have been seen in images holding giant machine guns.

Yakuza producer Toshihiro Nagoshi says that the idea behind Of the End is to "tear things down and unfold some new developments in the series." A title not released in the U.S., Yakuza: Kenzan!, took the series back into the 17th century, and Nagoshi seeks to shake things up again with Of the End.

"I think Yakuza is the sort of game you can play constructively in lots of different ways, and that's exactly why I wanted to try something like this," he says. "This isn't some kind of experimental work, though -- it's a fun, full game, and we're very confident as we continue work on it."

Think of it like this: What if Rockstar came out with a sequel to Grand Theft Auto: San Andreas that pitted Carl against a city full of zombie gangsters? It'd be pure awesome, that's what. Of the End will have a presence at the Tokyo Game Show, so expect more details this week.