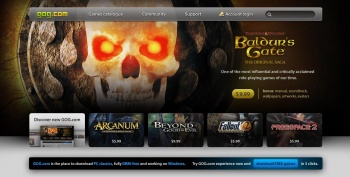 The videogame industry is apparently taking itself too seriously, and Good Old Games just thought it'd liven things up.

Good Old Games' marketing stunt where it faked its demise when it was really just relaunching is now behind us, but the aftershock is still being felt. That is to say, most people are probably just playing Baldur's Gate and forgetting that they said they wouldn't give the service another penny. But for those sticking to their guns, GOG.com's Guillaume Rambourg has offered his full explanation for the fake shutdown and why it was necessary.

In a detailed interview with Joystiq, Rambourg reveals that GOG had to shutdown anyway, and simply wanted to avoid being making a "boring" statement about it. "98% of the code of our website was rewritten ... which required a major change in our backend and as a matter of fact, taking down our platform for a few days," Rambourg said. "Due to this situation, we had only two options in terms of communication: either making an official 'boring' statement or taking a more creative route."

"We have been gamers forever and thus decided to pick the second option, as we believe the industry has been getting dead serious for the last few years," he continued. "If even the entertainment industry - which I believe is supposed to generate emotions and creativity - gets dull, where is the whole world going? Our aim was never to harm anybody here. All we wanted is to take an exotic path to cause a debate."

And cause a debate, the stunt definitely did. Looking back, Rambourg says: "I do not think we would have changed the PR angle we took ... Do not get me wrong: no arrogance here! I simply would like to stress again that we are a company willing to take a creative approach in everything we do and modestly try to help the gaming industry not to get so boring and 'sterilized.'"

Rambourg also revealed that "traffic on [GOG.com] the day of [its] launch was 20 times higher than ever in the past." The exact cause of this cannot be determined, but the widespread news of a beloved service shutting down no doubt helped market the relaunch to a few new people. Thankfully, Rambourg says GOG.com "will not have to close down the website ever again" due to the technical improvements made during the shutdown.

He does speak with regret on the situation, saying that "seeing our users wait in such difficult conditions really pained us" and that he "obsessively" checked Facebook and Twitter reactions. He also reminds everyone that GOG.com still has more Atari/Hasbro titles (which Baldur's Gate is one of) to launch in the future. Good Old Games is kind of like an abusive drug dealer. Sure, it may have hurt our feelings, but it also has what we need to get our fix.