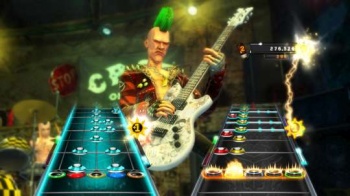 One of Activision's key franchises is circling the drain, and sales estimates for Guitar Hero games are getting some major pruning.

It's been on the cards for a while, but it seems like the Guitar Hero series has finally run out of steam and taken Activision's dreams of music game domination with it. According to one analyst, the situation is so bad that the only way Activision is going to get anyone to care about a new Guitar Hero game is by cutting a deal with Viacom and linking it to the Rock Band franchise.

Cowen and Company analyst Doug Creutz thought that interest in music games had effectively reset itself back to the levels it was at before Guitar Hero exploded onto the scene in 2006. He said that Cowen and Company had revised its sales estimate for Guitar Hero: Warriors of Rock, cutting it from 2.5 million US sales in the fourth quarter of 2010, to just 1 million. There was some small comfort for Activision however, although it was bittersweet at best, as Creutz said that Guitar Hero made so little difference to Activision's overall results, it was no longer a focus for investor's concerns.

I can't help but feel that Creutz is overcomplicated things. Activision could try to revitalize the Guitar Hero series with a Voltron-esque team-up with Rock Band, but it would probably be just as effective to wait a year or two before releasing another game, and try to make it a really good one. It's not wizardry or eldritch arts that make the Rock Band games score higher than the Guitar Hero games, it's that Harmonix is taking its time and isn't firing them out at a rate of at least one a year.

Guitar Hero: Warriors of Rock is available now for Xbox 360, PS3 and Wii, and Rock Band 3 comes out for the same platforms plus the DS on October 26th in North America, October 28th in Australia, and October 29th in Europe.