Imageepoch plans to revive the glory days of JRPGs by publishing a strong lineup of new titles.

Japanese developer Imageepoch recently teased that it'd soon put the JRPG back in a positive light. The company plans to do so by publishing its "JRPG" lineup of games that were revealed at a press conference in Tokyo.

Multiple games in the JRPG label spanning various platforms were shown off and discussed at the conference. The first game to be released is Saigo no Yakusoku no Monogatari (Final Promise Story), a PSP "dungeon RPG" that will have a "highly strategic command-based battle system" where enemies learn from previous skirmishes. Its "serious story" revolves around two warring nations: the player's relying on magic and the other on superior numbers and machinery. Imageepoch CEO Ryoei Mikage said Final Promise Story's concept is based around the idea that when characters die, they're gone for good. Similar to Heavy Rain, a character's death actually affects the game's story, an unheard of concept for a JRPG. It'll be out on April 28 in Japan.

A second PSP game called Black Rock Shooter: The Game was also announced. Black Rock Shooter's origin stems from an illustration posted up by a Japanese artist, which inspired a Japanese musician to create a music video that got millions of views, which led to the creation of a 50-minute anime. Now, Imageepoch is making a game. Black Rock Shooter takes place in 2051 where a war with aliens has decimated mankind down to a total population of 12. Humanity is aided by Black Rock Shooter, a powerful girl that wields giant weaponry, and must take on seven alien apostles to save the world. Details are slim, but the game's trailer shows a first-person shooter view, so it may be an action-RPG. It's scheduled for Japanese release in summer 2011.

Moving on from the PSP, Imageepoch revealed Chevalier Saga Tactics, which is both a downloadable PS3 title and free-to-play browser game on the PC. Chevalier is a more "orthodox" strategy/tactics game with battles taking place in an isometric view familiar to tactical RPG players. It's set in medieval times with players taking on the role of a knight that must regain his kingdom's territory. Chevalier will have two battle modes: one where players control individual units of various jobs such as mages and warriors, and a "large scale" mode where players control entire armies. It'll be released sometime in 2011.

Further, Imageepoch revealed its plans on four long term projects that include a JRPG conversion of a PC game and a collaboration with a known JRPG developer. It also teased a collaboration with Sega, with the companies showing a single concept art image for the project which Sega will reveal next year. 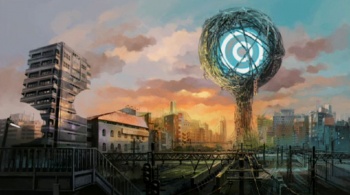 All in all, Imageepoch's ambitions are very much like Level-5's, which has become its own force in Japanese development and publishing. There was no word on these Imageepoch games coming overseas, but I would bet that at least a few of them are going to be picked up.