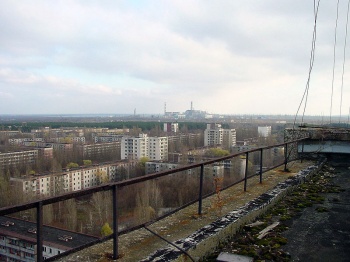 Ever wanted to visit the site of one of the greatest technological tragedies in history? Start booking your calendars for 2011.

On April 26, 1986, the Chernobyl nuclear power plant near the city of Pripyat, Ukraine suffered a catastrophic accident when the No. 4 reactor gave up the ghost and burst, showering the region with poisonous fallout. As a result of the incident, an estimated 4,000 people died and a staggering 350,400 were evacuated (as of 2000 estimates).

It also provided us with some seriously creepy photographs and one of the most oppressively atmospheric settings ever in a videogame, but that's beside the point.

While 2,500 technicians maintain the irradiated remains of Chernobyl, the entire area is virtually a ghost city (with good reason). However, if you still want to visit one of the most eerie and potentially medically dangerous places in the world, the Ukrainian government will be officially opening Chernobyl up to tourism next year - a quarter-century after the original accident - said government representatives.

Though Emergency Situations Ministry spokeswoman Yulia Yershova did not give an exact date for tours to begin, she said that experts were devising routes that would not just be historically accurate and informative for Ukrainians and foreigners alike, but that the routes would minimize exposure to dangerous radiation. That's good to know. "There are things to see there if one follows the official route and doesn't stray away from the group," Yershova told the AP. "Though it is a very sad story."

The United Nations Development Program chief Helen Clark supported the Ukrainian plan both on the grounds that it would raise money for the region and teach the world about nuclear safety. "Personally I think there is an opportunity to tell a story here and of course the process of telling a story, even a sad story, is something that is positive in economic terms and positive in conveying very important messages," said Clark in a statement.

Ukrainian officials also say that the project to build a new, safer shell for the remnants of the destroyed reactor will be completed by 2015. The new structure will weigh 20,000 tons and will be large enough to contain the Statue of Liberty or Notre Dame Cathedral. Man, I hope they get pictures of that thing being put into place.

So, who's going to Chernobyl? Raise your hands.