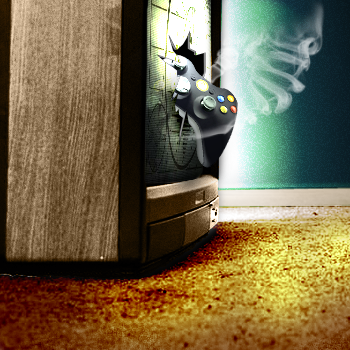 You can sink dozens of hours into Fallout: New Vegas, although some of them will be do-overs.

Fallout: New Vegas isn't the first game to have game-breaking bugs, but if breaking and freezing were an Olympic sport, it would probably be a lock for the gold medal. Few major, modern games can boast as many glitches, flaws and defects as New Vegas, and in Issue 289 of The Escapist, Russ Pitts takes us on a tour of some of his "favorites."

Scorpion Mountain
I'm a few miles south of Goodsprings when I see it: a nest of giant scorpions nestled high up on a hill. There are a lot of them. This is bad.

I crouch into a shooter's squat, pull out my varmint rifle and try to get a bead on one of the eight-legged freaks. I give it a few shots to the thorax, but that only makes it madder. It's still coming, and coming fast. A few more shots and it's down, but that was only the first and judging from my threat detector, there look to be three more - at least.

I edge closer, hoping for a clear shot, and as I get nearer, I realize this group of scorpions isn't going to be a problem for anyone any time soon. They're not on the mountain, they're in the mountain. Victims of a clipping bug, these giant scorpions are embedded in the landscape, unable to free themselves. Lucky day for me. Until my Xbox crashes and I have to do it all over again. This time the hard way, as the scorpions have apparently freed themselves. I die twice and finally give up.

A lot of the glitches have since been patched away, but New Vegas set the bar for a buggy game pretty darn high all the same. You can read more about it in Pitts' article, "What Happens in New Vegas."

Letters to the Editor: Exterminate! The Escapist Staff 1 Comment