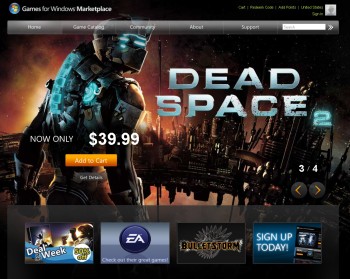 Hang on to your hats, kids, because Microsoft promises, really and for true, that Games for Windows Live is going to get better.

It's kind of a tired joke by now, making fun of Microsoft's fumbling efforts to find relevance in the PC gaming scene. And in all fairness, Kevin Unangst's recent comments about the service are far from unreasonable; after all, he's not promising that Games for Windows Live will save PC gaming, just that it's going to suck less in the future.

Unangst, senior producer at Microsoft's Interactive Entertainment Business, said the idea of bringing things like achievements, friends lists and multiplayer matchmaking to PC gaming is a good one but Games for Windows Live got off to a rough start because it was designed first and foremost as a console service. "We also didn't back it up with the most important thing, which is doing fantastic games to take advantage of the service," he said. "A network by itself isn't valuable - there needs to be great games to take advantage."

The plan now is to address those shortcomings by seeking input from developers, like Fable studio Lionhead and Gas Powered Games, which does Age of Empires Online. "I look at it as like what Halo did for Xbox Live, where you had Bungie and Microsoft going back and saying, 'To make a great multiplayer game here's some things I need in the service, here's my audience'," he continued. "The Age of Empires team has got a lot of great input and the same can be said for Lionhead, who said, 'We're going to build Fable 3 on the PC' and know what they want out of the service."

"The underpinnings are great," he added, noting that the relaunched GFW Marketplace is greatly improved and that developers are starting to show interest in the platform once again. "Epic did a great job of promoting Live with Bulletstorm," he said. "They're pleased with the platform and the service is going to continue to get better over time."

Maybe "getting better over time" isn't exactly shooting for the stars but you have to start somewhere and given Microsoft's ugly lurching so far, keeping expectations low probably isn't a bad idea.