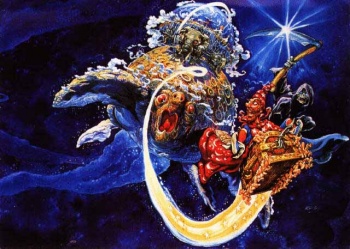 One of the most unique fantasy worlds around is about to get a big infusion of new stories.

Sir Terry Pratchett has signed an agreement with TV production company, Prime Focus, to create a Discworld TV show, based on the adventures of Ankh-Morpork's City Watch. Pratchett's Discworld books have inspired a number of spinoffs, including miniseries and videogames, but this will be their first time as an ongoing TV show.

The city of Ankk-Morpork is a little like the real world Budapest, in that it is technically two cities very close together. On its cobbled streets walk humans, dwarves, trolls, golems, vampires, humans who think they're dwarves, werewolves, and a whole host of other fantasy races. The City Watch, under the able command of Samuel Vimes, has the difficult task of keeping some kind of order in the city,

Pratchett has referred to the characters of the City Watch as being the jewel in the Discworld crown, and they have starred in eight of the series 38 books, with appearances in plenty of others. This will be the first time that Pratchett has allowed anyone to create new Discworld stories for television, although the author will be overseeing the series. The show will be an episodic, crime-a-week, cop show, and according to Prime Focus, a number of international TV networks have expressed an interest in it.

Prime Focus' managing director, Rod Brown, said that adapting the world of the Discworld books was a huge responsibility, but he thought that the series would translate well to television. He also said that Prime Focus had assembled a strong writing team, including former Monty Python member, Terry Jones. Pratchett expressed his excitement over the project, and said that he was happy to be working with Brown again, after their previous collaboration on the Discworld TV miniseries.

There's no indication of when the series will air, but hopefully, it will be relatively soon. With all the special effects needed to bring the Discworld to life, however, that seems rather unlikely.