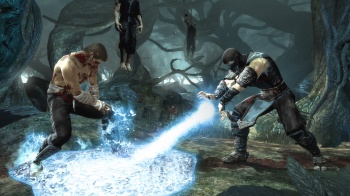 Anyone can play Mortal Kombat online, it's just some players will have to fork out ten bucks.

Warner Bros. may be the latest publisher to start using an online pass system, holding features and/or content back from pre-owned customers until they pay a fee. According to sources, WBIE will debut this policy with Mortal Kombat in April, and then use it other titles, such as F.E.A.R. 3 and Batman: Arkham City.

With both single and multiplayer games included, the initiative sounds most like EA "Project Ten Dollar" initiative, which covers online multiplayer and bonus content such as extra characters or missions in Mass Effect 2. Interestingly, the source says WBIE will not mention the online pass anywhere on the game's packaging. The information about the pass is apparently intended for retailers, who presumably will inform customer when they buy a pre-owned copy of the game.

The pass will cost 800 points on Xbox Live, or $10 on PSN. Pre-owned customers will get a two-day trial period of the online modes to decide if they want to pay. This is all just rumor at the moment, but the information to retailers, which you can see below, seems quite genuine. We've contacted WBIE about this, and will update if we hear anything back.

Mortal Kombat, available on April 19 for the PlayStation 3 computer entertainment system and the Xbox 360 video game and entertainment system from Microsoft, includes a one-time-use registration code that gives players access to all online modes in the game. Players who do not have a code will get a free two-day trial of the online play and then be able to purchase the online modes for 800 Microsoft Points on Xbox LIVE Marketplace and $9.99 on the PlayStation Network.