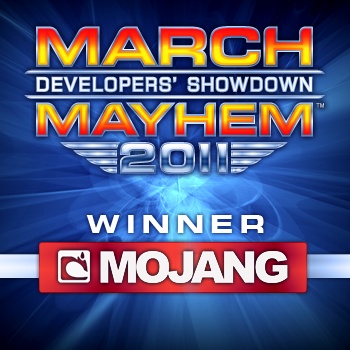 March Mayhem: Developers' Showdown 2011 is over and the winner is none other than the tournament Cinderella and 16th seeded wildcard, Mojang.

At the beginning of this year's March Mayhem, Valve was projected to take it all once again, but Zynga was still on the tip of everyone's tongue. Last year, the casual gaming king upset a number of community favorites until meeting Valve. Even after generating the highest voter turnout for a match-up in March Mayhem history, Zynga lost right at the end. 2011 was a different story. As the first round came to a close, Zynga was sent home packing by Cryptic Studios. As the dust settled, voters noticed another, more impressive upset -- number 1 seeded Nintendo had been taken down by wildcard and number 16 seeded Mojang AB, creators of Minecraft.

Mojang was voted into March Mayhem by members of The Escapist Publisher's Club for one of four wildcard spots going up against the number 1 seeds. Little did fans suspect that the Minecraft community was strong enough to send a powerhouse like Nintendo home in the first round. Mojang continued its Cinderella journey as it bulldozed through veteran developers Namco Bandai, Epic Games, and Obsidian before finally crushing last year's champion, Valve.

This brought the newcomer face-to-face with BioWare, who had just given Blizzard Entertainment a kick to the curb without breaking a sweat. The stage was now set for a battle for a showdown between the indie developer and the veteran powerhouse. After four long days of voting, Mojang AB emerged victorious and won a paid advertising contract with The Escapist! BioWare, Valve and Blizzard also received advertising contracts for winning their divisions or being part of the Final Showdown.

As for the community, many participants voted for their favorites over the six rounds of battle and each time they did, they were entered into a random drawing for the Grand Prize, an Alienware M15X Laptop. Three other winners will also be chosen at random for one of three Alienware M11X Laptops. The amount for all of the prizes together totaled almost $5000, thanks to March Mayhem's exclusive sponsor, Alienware. These winners will be chosen within the next couple of days.

As a side bonus to those participants who filled out their brackets before the event began, we took the top 13 brackets with the best scores and made them Publisher's Club members. They now get to enjoy high quality video along with video podcasts and mobile access, exciting bonus features, discounts from online retailers, and an even better user experience without the hassle of advertisements! Congrats to the following winners:

Congratulations to all the winners and a big thank you to everyone who participated in this event. A special thanks to Caliostro, Celtic_Kerr, GeorgW, MiracleOfSound and XxRyanxX for being our Escapist Ambassadors and helping answer questions from new members as well as fielding questions regarding the tournament.

March Mayhem: Developers' Showdown is over, thank you once again and see you next year!