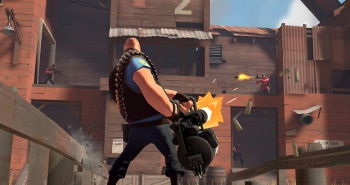 One of Gabe Newell's theoretical Steam payment methods would charge more for players that are awful people.

There are a few standard payment models for videogames today that include retail, monthly fees, and microtransactions. Valve boss Gabe Newell recently called these models "broken," revealing that the company is looking into new ways of charging customers based on the customers themselves.

In a lengthy interview with Develop, Newell said: "The industry has this broken model, which is one price for everyone. That's actually a bug, and it's something that we want to solve through our philosophy of how we create entertainment products."

"So, in practice, a really likable person in our community should get DotA 2 for free, because of past behavior in Team Fortress 2," Newell added. "Now, a real jerk that annoys everyone, they can still play, but a game is full price and they have to pay an extra hundred dollars if they want voice."

Newell also went over how Valve is already charging high-value customers "negative" amounts, such as those that were paid royalties for creating Team Fortress 2 items. "Their cost for Team Fortress 2 is negative $20,000 per week," he said. "You're never going to see that in a retail store ... It's people who make hats get paid. People who are really popular play for less, or free."

Could this be a method that actually reduces the number of people whose internet anonymity causes them to spout an endless number of obscenities and racially motivated comments just because they were gunned down by a sniper? It seems like it might. Not that internet jerks would disappear overnight, but money could be a strong motivator to make someone pat a fellow player on the back instead of tea-bagging him.