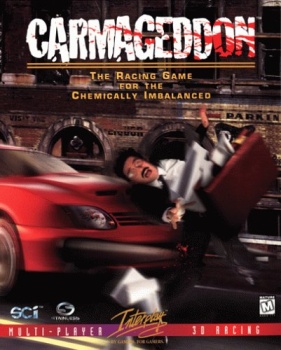 Do my eyes deceive me, or is that a countdown to a new Carmageddon game I see?

A little history lesson for you kids out there. In 1997, Stainless Games, SCi and Interplay came out with Carmageddon, "the racing game for the chemically imbalanced," in which victory could be earned by being the first across the line, destroying the other cars in the race or killing every pedestrian in the level. And they killed real good, let me tell you, with plenty of blood, guts and splatter on the windshield. A few countries [we're looking at you, Germany] actually censored the game, turning the pedestrians into zombies that spurted green liquid when hit, or banned it outright.

Controversy aside, it was also stupid amounts of fun, with big, open sandbox levels and optional victory conditions that let you race, crash or kill as you saw fit. It was good enough to spawn a couple of sequels, Carmageddon II: Carpocalypse Now in 1998 and Carmageddon TDR 2000 a couple of years later, but a planned Carmageddon 4 was canceled and that, sadly, was the end of the series. Until now! (Maybe.)

If you will turn your attention to Carmageddon.com, you will notice a countdown timer, currently down to 11 days, 15 hours and change. What happens when it hits zero? I have no idea but I assume it will involve a catastrophic coming-together of 600 screaming horses and an old lady with a walker. And it will be awesome!

It could be something else, I suppose, but I can't imagine what. I will also take this moment to say that if it turns out to be a top-down iOS-exclusive game, I am going to be supremely disappointed. We'll keep you posted!