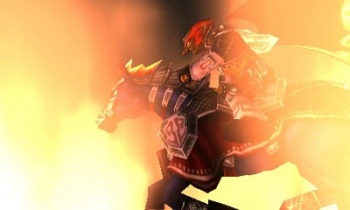 Apparently Nintendo's got a new Zelda game in the works; it just got rated and its title makes it sound huge.

Remember how, way back in 2009, Zelda director Eiji Aonuma explained how his next game in the series would be bigger and better than The Twilight Princess? Well, it turns out that the game may be even bigger than anyone expected. Based on the title the ESRB just revealed, it certainly sounds like the series might be expanding into MMOs.

Here's what's known, at the moment: The game is called Zelda Universe, the publisher listed with the ESRB is Nintendo, and the platform is "online." Oh, and game is rated E for Everyone.

Now, "Zelda Universe" is the name of the official Zelda website. That said, the ESRB doesn't rate web content.

At the Game Developers Conference earlier this year, Nintendo CEO Satoru Iwata made a point of mentioning that something big was being planned to mark the 25th anniversary of Zelda, so it doesn't seem too unreasonable to assume that this game has something to do with that plan.

It seems likely that Nintendo will reveal more about the game at E3 next month, especially since there has to be an actual game to show to the ESRB to receive a rating.

Author's Note: No image has been released for this title. The graphic here is from the 3DS version of Ocarina of Time.