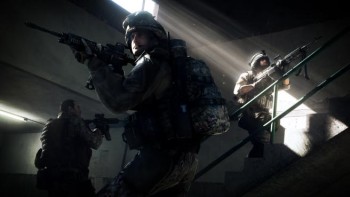 Electronic Arts has confirmed that Battlefield 3 will not be released on Steam.

A list of digital distributors carrying EA's upcoming Battlefield 3 turned up in mid-July and then disappeared without a word, but before it could slip out of sight a few sharp-eyed observers noticed that Steam was not among them. In light of the recent Origin-slash-DLC-fueled passive-aggressive dust-up between EA and Valve, most people came to the obvious conclusion: no Battlefield 3 on Steam.

To nobody's great surprise, that is in fact the situation, as EA has confirmed with Kotaku that the game will not be on Valve's digital platform. "Battlefield 3 will not be available on Steam as the service restricts our ability to directly support players," a rep said. "The service limits our ability to deliver patches and downloadable content directly to players. No other download service has adopted these practices. At EA, supporting our players is a top priority, and we are happy to partner with any download service that does not restrict our ability to connect directly with our own consumers."

If that has a ring of familiarity to it, it's likely because it's basically the same thing EA said about the earlier disappearances from Steam of Crysis 2 and Dragon Age 2. But both of those games had been out for awhile prior to their removal, whereas Battlefield 3, barring a change of heart [and policies], will never go near it. That could be a boon for EA's fledgling Origin platform - or it could be a stick in the spokes of its effort to knock Modern Warfare from its perch atop the genre.

Battlefield 3 comes out on October 25 for the PC, Xbox 360 and PlayStation 3.