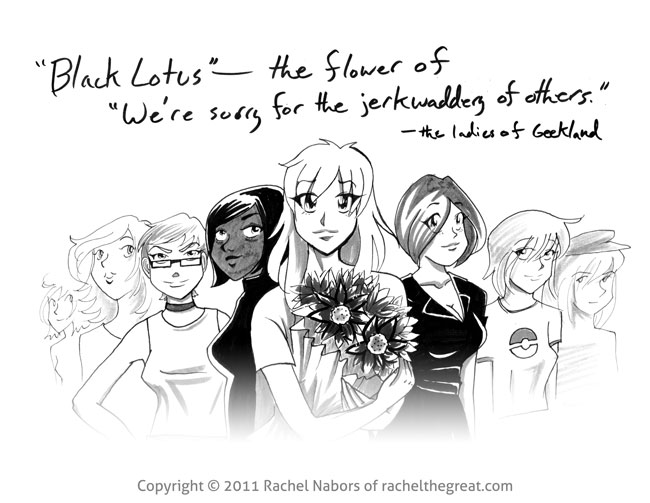 By now, you've probably heard all about Jon Finkel's bad date with Alyssa Bereznak. Actually, it wasn't the date itself that was bad, it was that Bereznak decided the best way to handle her lack of chemistry with Finkel was by mocking him on Gizmodo. Not because he was a jerk, or rude, or creepy, but rather because he played Magic: The Gathering, which clearly rendered him undateable.

Now, Alyssa is perfectly entitled to date men based on whatever criteria she likes. Some of us would be impressed by Finkel's vast success in MTG competitions - he was, at one point, World Champion - and being the best in the world at something is pretty damn impressive. But it's ok if Alyssa thinks playing card games is a waste of time; again, it's her love life, and she can conduct it however she likes.

Except humiliating someone by name online to make yourself seem cool is disgusting, unfair, and mean. To do it for fun and profit, as the original closing line of her article suggests, is worse. And to do it simply because your date - who, according to your own words is otherwise a perfectly decent person - committed a crime no greater than being passionate about something you don't personally give a damn about, is unforgivable.

By all accounts, Finkel is handling the entire affair with grace and poise, laughing off Berenzak's poorly-written blog post and generally getting on with his life. And Gawker is certainly no stranger to "nerd baiting," the practice of writing purposefully inflammatory posts simply to get web traffic, so Bereznak likely sees this entire uproar as a boon. Finkel will get plenty of attention, all positive, Bereznak will go on to write other, equally pointless posts, and the world will continue spinning on its axis. So why make any more of a fuss about it?

Because if the positions had been reversed, and a man had written a similarly snarky post claiming that a woman should put a "fondness for knitting" on her profile to prevent accidentally going out with her, the female community would be in an uproar - and rightly so. But if we're going to point out when men behave like jerks, it behooves us to do the same when women do it.

So on behalf of women everywhere, we Ladies of Nerdland would like to apologize to Jon Finkel for Alyssa's bad behavior. Hers is exactly the kind of behavior we despise, the kind that lives up to the mean girl stereotype. She probably won't have enough class to be ashamed of how shabbily she treated you, so we will be ashamed for her. And, also, of her.