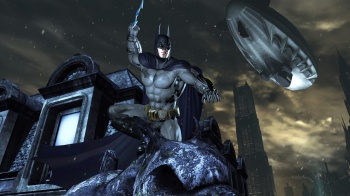 The Arkham City developer says it wants to make the game as good as possible on all platforms.

Rocksteady's Sefton Hill says that PC gamers will forget all about the Batman: Arkham City delay when they see how good version they are getting is. Rocksteady and Warner recently pushed back the game's PC release date from October to November.

Hill didn't spill the beans directly about the reasons for the delay, but he did imply that Rocksteady was using the time to give the game a little extra polish. Hill, who is the game's director, said that Rocksteady were very aware of the differences between the various platforms, and wanted to make sure that it ran as well as possible on the PC. He also said that Rocksteady listened to feedback as much as possible, both from the PC gamers within the studio and from those without.

"We got a lot of credit on the first one, about how well it played on the PC, and how well refined the controls were," he explained. "It's because part of our attitude is always to listen to those people. We want to make the best game we can for all SKUs."

Hill said that PC version of Arkham City would be the best looking of the lot, with a more fully realized world and higher resolution textures. He said that the delay was only a couple of weeks, and that PC gamers would agree that it had been worth it.

Batman: Arkham City comes out for PS3 and Xbox 360 on October 18th, and on PC in November.