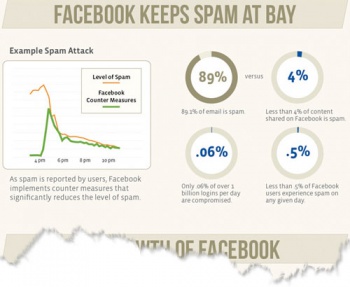 Percentage-wise, only a small amount of Facebook's user accounts are compromised. The raw numbers are still pretty staggering, though.

Odds are, either you or a friend have wound up on the wrong end of a hacked Facebook account. It turns out that this happens far more than you'd probably expect: New official statistics from the social network have revealed that more than 600,000 are hacked on a daily basis.

Now, according to the statistics, only 0.06% of the billion-plus account logins that happen every day are compromised. Or, as Sophos so helpfully points out:

Additionally, Facebook's got a new security feature that will allow you to name "Trusted Friends" who can give you hand if you wind up needing help to access your account (read: someone else has hacked your account and locked you out). Basically, Facebook will send codes to your friends, who will be able to forward them on to you.

Additionally, Facebook is implementing App Passwords, which will let you use Facebook Apps without having to use the credentials tied to your Facebook account. It's certainly good to see that the company is working to increase its users' security.

Game Theory: Will 2015 be the End of YouTube Rewind? MatthewPatrick13 4 Comments

Gallery of the Day: 8 Companies Mark Zuckerberg Got Himself For His Birthday DrStrangelove 0 Comments