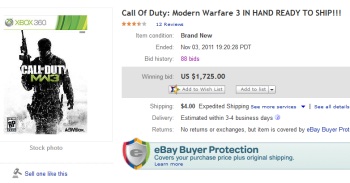 One of the copies of Modern Warfare 3 that was accidentally let go by Kmart has sold on eBay for over $1700.

You may have heard that Kmart stores in the U.S. were, for a brief while yesterday, selling copies of Modern Warfare 3, which isn't actually scheduled to come out until November 8. The company apparently put a stop to it fairly quickly and Xbox Live enforcement guy Stephen Toulouse warned that "playing early my impact your account" [presumably in a bad way] and while that seems pretty obviously and grossly unfair to people who purchased the game early but legitimately, what's really appalling is the amount of money that non-Kmart shoppers appear willing to pay for these things.

Numerous copies of the game began appearing on eBay yesterday and while most of them were taken down, at least a few are still kicking, including this one, taken home by some crazy bugger for a whopping $1725. It's a little dubious, but there are a lot of people out there with more money than brains and even if it turns out to be a fake, there are 87 other ridiculously inflated bids to choose from.