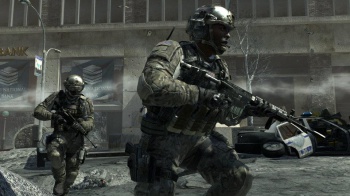 Some people really want to get their hands on the new Call of Duty early.

Gangs of armed robbers have hijacked two trucks this weekend, and made off with thousands of copies of the latest Call of Duty game, Modern Warfare 3. The attacks took place near Paris and the stolen goods have a total value of more than three quarters of a million euros

In the first attack the thieves used a car to block the road the truck was taking, causing it to crash. The drivers then apparently got out to "make a report," at which point they were attacked with tear gas. While the drivers were incapacitated, the masked men stole the truck, which was thought to contain around 6,000 copies of the game. A second truck, bound for a store in the Yvelines district was attacked by a trio of thieves, who threatened the drivers with weapons, and again made off with the vehicle.

It's not known what happened to the copies of the game, although it's not hard to imagine them being sold on to hordes of excitable Call of Duty fans eager to get their hands on the game a few days early. After all, someone already paid over $1700 for an early copy of the game, and it wouldn't surprise me if there were plenty more where he or she came from.