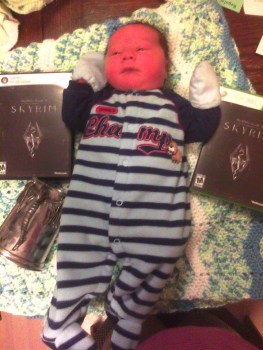 A couple of die-hard Elder Scrolls fans have claimed the prize in Bethesda's "Name Your Baby Dovahkiin" challenge.

You might recall that back in February, Bethesda put forth an awesome challenge with an awesome prize: anyone who had a child born on November 11, 2011, and who named that child "Dovahkiin," which means "Dragonborn" in Skyrim's draconic language, would be given Steam keys for every game Bethesda has ever made [limited to those available through Steam, naturally] and, even cooler, for every game Bethesda ever makes in the future. That's a pretty sweet prize for something as simple as saddling your kid with the worst name since Sue [or possibly Obi-Wan] and sure enough, somebody's laid claim to it.

Megan and Eric Kellermeyer revealed on their webcomic site 56shards.com and also through official documents sent to Bethesda the birth of Dovahkiin Tom Kellermeyer, who came into this world at 6:08 pm on 11/11/11 at a healthy 8.5 pounds and 19.5 inches. "Mama and baby are doing perfect. The doctor said it was a perfect delivery," Eric wrote. "Our daughter Kyari is very excited to have a baby brother."

Congratulations to the proud parents and best of luck to little Dovahkiin, too. Here's hoping you grow up to thank your parents for the gravel in your guts and the spit in your eye, and if that doesn't work out, you can always fall back on Tom.

Game Theory: Fallout Bottle Caps Are Worth How Much?!? MatthewPatrick13 6 Comments

Call of Cthulhu: Dark Corners of the Earth - Four Out Of Fhtagn Stars Fanghawk 24 Comments