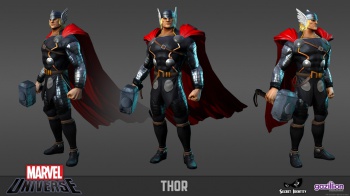 Even though Marvel Heroes will run in your web browsers, the game will feature Unreal Engine graphics.

Even though the Marvel Comics MMO - Marvel Heroes - has quietly been trucking along for a while, but little has been revealed about the game. Gazillion Entertainment (the parent company of Secret Identity Studios, which is developing the game) has just announced that the free-to-play MMO will run on the Unreal Engine 3.

Jeff Lind, Secret Identity's studio director explained why the developer decided to go with the Unreal Engine as opposed to developing something in-house:

"We love Unreal Engine 3's streaming system. It's made our entire technical approach possible and is easy to work with. We also love the flexibility we get from the actor components, which have empowered us to make all kinds of customizations without sacrificing the built-in features of the engine."

The MMO has been generating a lot of interest (and skepticism) with what little's been revealed about it. The title will be a free-to-play browser game, and instead of creating unique characters who work alongside iconic characters - like other superhero MMOs - you'll play heroes like Spider-Man, Wolverine, and Thor.

At the moment, a release date for Marvel Heroes has yet to be announced.