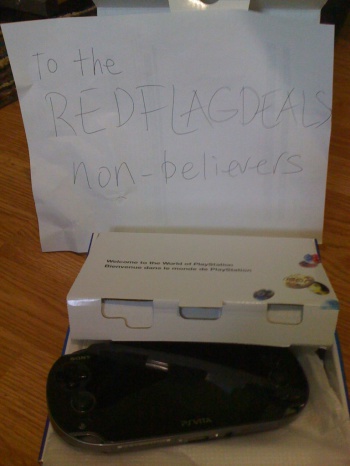 Whoops! Some lucky customers in the Great White North have received (very early) deliveries of their PlayStation Vitas.

The PlayStation Vita isn't due out here in North America for a little while. The "First Edition" bundles are supposed to arrive on February 15th, while the wider launch won't take place until February 22nd. However, it seems that some some Canadian gamers have received their units much earlier than expected.

The Red Flag Deals forums have lit up with users reporting that they received shipping notices for their Vita pre-orders from Amazon.ca. That's not all: Some folks are stating that the systems have already arrived and are starting to post photos of the un-boxed Vitas.

If you're looking to pick up an early Vita, though, don't bother heading over to Amazon.ca. The site's become aware of the error and won't be getting the portable systems to shoppers until the official shipping date.