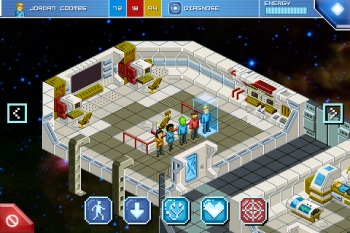 An indie studio that raised $37,000 on Kickstarter got to use $4000 for actual game development.

$37,000 sounds like a lot of money to make an indie iOS game, especially when the Kickstarter funding goal was little more than half that amount - $20,000, to be precise. But money comes and money goes, and in the case of Star Command developer War Balloon Games, the money went a whole lot faster than they ever expected.

In an update to the Star Command Kickstarter page entitled "What the Hell Did You Do With Our Money?" the team explained that the 37 large was very quickly whittled down to about four grand that it could actually dedicate to the game. About $2000 was lost to "no-shows" right off the top, reducing the actual income to a still-respectable $35,000. Kickstarter and Amazon Payments then took their cut, bringing it down to around $32,000.

Then came "prize fulfillment," things like printing all the posters and shirts promised to backers and shipping them around the world, which cost a cool ten thou, a staggering number the team did not see coming. From the remaining $22,000, $6000 went to music [for the game, presumably, not the "Hit It Big On Kickstarter" party], $4000 went to attorneys, startup fees and a CPA, $2000 paid for poster art, $1000 was spent on iPads and $3000 was spent on PAX East.

That left $6000, but the pain wasn't over. Because that money counts as income, the tax man claimed a slice as well, to the tune of $2000. "So were right around $4000 remaining and even that cursory math isn't working as there are other things that weren't big tickets but sapped the coffers," the team wrote. "There's odds and ends etc, so that goes rather quickly as you can imagine."

Much of the bleeding can be attributed to the team's inexperience, although I'm a bit baffled as to how it didn't have the prize fulfillment costs nailed down, but that's almost inevitable in ventures like this; you learn as you go. The team said that if it could do it all again, it would "keep the attorneys out of it," and also advised other young studios to be sure of their costs before committing themselves to anything.

"We just didn't fully appreciate the cost of printing 200 posters, shirts, and more than anything shipping. Shipping is, A, expensive, B, a pain in the ass when you have [poster] tubes and C, time consuming," the update explains. "None of those things are productive. We don't resent having sent that stuff off - we think the posters and shirts are awesome and we are super proud of them and it seems like everyone loved them, so that's great. But they were a lot of work."

Still, the studio added that its Kickstarter experience has been a positive one and said the game wouldn't be where it is not without the funds raised. "We're extremely confident were going to hit our summer release date," it wrote, "and that never would have happened without you guys."