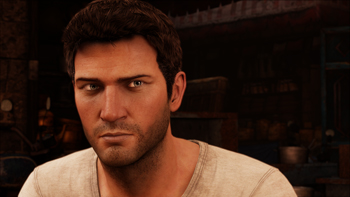 Nolan North has gained fame and celebrity in the gaming industry by being one of the most prolific voice actors around. You can hear him in dozens of games a year, but his role as Uncharted's Nathan Drake has probably won him the most fans. North's portrayal of the sarcastic treasure hunter has won him a prize far greater than anything Drake's ever gotten his hands on - an appearance in the upcoming J.J. Abram's directed Star Trek sequel.

In an exclusive interview with Eurogamer, North revealed that Abrams asked him to take on a small part in the upcoming film during the production of Super 8. North says Abrams offered him the role because both Abrams and his son "are huge fans of Uncharted."

Abrams is cast in the interview as a huge fan of gaming, which isn't surprising considering the Lost creator's vaunted position in geek culture. North recalls a conversation with the director where Abrams describes gaming as misunderstood and on the cusp of getting the respect it deserves.

While Abrams is currently hard at work finishing up his Star Trek sequel in time for next year's release, gamers can hear North's voice a little sooner in 2K's upcoming Spec Ops: The Line, which drops this June.