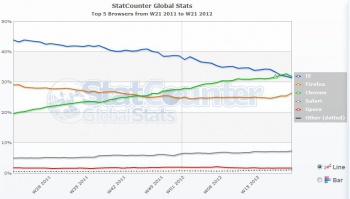 Oh, how the mediocre have fallen. Back in the day, Microsoft's Internet Explorer was cool. Really cool. Then people realized the browser sucked way more RAM and CPU cycles than it needed to, but there wasn't really an alternative. Mozilla came out with the Firefox browser in 2004, and offered the first real challenge to IE's superiority, with tabbed browsing and helpful extensions. Google followed with Chrome in 2008, and with two viable solutions - not counting Safari if you're a pesky Mac-user - the worldwide usership of Internet Explorer waned. In October 2010, more than half of the world used a browser other than IE. Chrome surged in popularity to top Firefox late last year, and this month, for the first time, Google's browser can boast it is the world's most widely used way to view the internet.

According to Statcounter.com, the moment Google Chrome surpassed IE was the week of May 7 - 13, when Chrome garnered 32.76 percent of total browser usage compared to 31.94 percent for IE. Firefox lagged behind at 25.47 percent.

Of course, those are worldwide stats. Certain countries still prefer IE such as that backwards nation known as the United States, where as of the week ending May 20th 30.94 percent used IE to Chrome's 27.11 percent.

I adopted Chrome almost as soon as it came out, and I've always loved how it shows the page I want to see without getting in the way. The extensions and applications that run through it now are just icing on the already delicious cake. I'm happy to see the rest of world digs it as much as I do.

Critical Miss: The Adventures of Hodgkin-Chan The Wooster 59 Comments