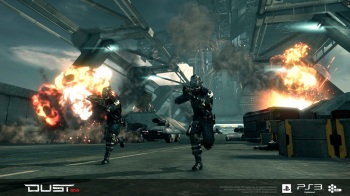 CCP has a "four-year roadmap" planned.

Dust 514 is CCP's upcoming free-to-play PS3 shooter that will link up with the space simulator EvE Online to create the first shared gaming universe. This means that a battle to say, conquer a planet, will now require spaceships and infantry to complete complimentary goals. Even so, developer CCP has kept pretty quiet on specific game mechanics that show how the worlds will fit together. Senior producer Jon Lander opened up recently in an interview with Eurogamer, sharing not only details about new gameplay mechanics, but that the designers have four and a half years of content planned for the interconnected games.

At launch, the games will begin with shared chat channels, markets and, obviously, maps which can then be ironed out for bugs and balance issues on a larger scale. "We're going to start on that," Lander said. "We have a lot of dials we can tweak to balance it, because no one's done this before, we don't know how it will exactly turn out."

Once any quirks are ironed out, CCP will start rolling out additional resource sharing and building creation tools that encourage interaction between players in space and planetside, best represented by giant freaking space elevators. "If you take all the districts in death matches, you take over control of the planet and get the [Surface Control Center]" Lander explained. "If you and somebody in Eve are allied - so, in Eve you've got control of the Orbital Control Centre - then you get a space elevator, which makes the transport of goods and services that much easier and cheaper."

According to Lander, there will be many more features added in the upcoming years, but right now the most important thing is Dust's release and integration into Eve's servers. "Right now, Dust is working on its own production server" Lander detailed. "As we go through the summer, we're going to move [Dust] on to Eve's public test server, so that will be when two games first sort of link up."

For anyone hoping to try out Dust 514 beforehand, an open beta begins on June 29th.

Gallery of the Day: 8 of the Best Giant Videogame Spaceships DrStrangelove 39 Comments